It’s a little over a week before the reveal of one of Morocco’s largest murals that not only demonstrates how tightly-knit the fates of Poland, Morocco, the U.S. and the U.K. have been but also, through the artistic work of the all-women team of artists responsible for painting it, becomes a symbol of women empowerment.

“The reason why we decided to paint the mural is to commemorate and honour the great military action that Operation Torch had been,” Poland’s Ambassador to Morocco, Krzysztof Karwowski, told TVP World on Sunday.

“This project, in essence, is also to highlight the pivotal role of Poland’s intelligence during the WWII era and, in particular, the contribution of Polish Army Major Mieczysław ‘Rygor’ Słowikowski not just to the successful Allied amphibious landing in Vichy French-controlled Morocco but to their ultimate victory in WWII and, in a longer run, Morocco regaining its independence,” Karwowski said.

Operation Torch was the first major U.S. military operation in the European-North Africa theatre during World War II and a milestone in the deep, historic ties between the United States, its European allies, including Poland, and Morocco. Carried out between November 8 and 16, 1942, at a number of locations in Vichy French-occupied Morocco but also via British amphibious landings and parachutist action in Algeria, the operation allowed the Allies to attack Axis-controlled Europe’s soft underbelly thus ultimately contributed to the defeat of Nazi Germany. By extension, Morocco was able to pursue its independence ambitions and regain sovereignty on March 2, 1956.

But all of this could not become a reality if not for Polish Major Słowikowski and his network of spies in the guise of entrepreneurs that collected vital data on the Vichy French supply and defence lines to then forward them to the U.S. legation in Tangier.

It was 80 years ago that the Allies carried out Operation Torch in French North Africa on November 8-16, 1942 – a major set of military manoeuvres...

Painted on an over 30 m-tall office building in the city of Kenitra, in whose vicinity one of the landings took place in 1942, the mural is an original idea of the Polish Embassy in Rabat. The building is located on an avenue named in honour of Muhammad V – the first ruler of post-WWII Morocco. The monarch is featured in the design. He can be seen seated next to U.S. President Franklin D. Roosevelt, who in turn is poised in the middle. To his left – British Prime Minister Winston Churchill. The three officials are, in fact, portrayed as seen during the Anfa Conference (also known as the Casablanca Conference) that was held in FDR’s villa in Casablanca in 1943.

“It was Polish history expert Paweł Kudzia’s idea to dedicate part of the mural to the Anfa Conference,” Karwowski said, adding that during the meeting in Casablanca, Roosevelt promised Morocco’s independence to King Mohammed V but was unable to make good on his promise due to his death. Morocco regained independence 13 years later.

Słowikowski, although not present in person during the conference, was symbolically added to the composition as a somewhat unsung hero of Operation Torch.

“Painting the mural here was very deliberate and a conscious decision,” Karwowski stressed.

Asked about Kenitra citizens’ reception of the project, Ambassador Karwowski described it as “very positive.”

“The citizens of Kenitra were thrilled already when the mural was being painted. They would stop over and ask what it was all about,” he said.

“Operation Torch and Poles' contribution to its delivery is largely unknown among Moroccans,” the diplomat admitted. “The mural, therefore, demonstrates educational and pedagogical values. Its goal is to demonstrate how the history of Morocco binds with that of Poland and the U.S.”

At the end of the day, “Poles lit not just Operation Torch, so to say, but also Moroccan hopes for Morocco’s independence.” 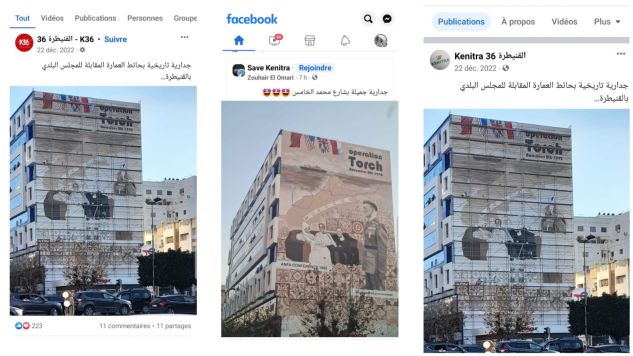 Screenshots of two local media comments (L, R) and private praise for the mural (C). L and R read "a historical mural in front of the Municipality Hall in Kenitra". The screenshot in the centre reads "A beautiful mural in the Mohammad V Avenue. Photo: TVP World

Responsible for painting the mural was an all-female trio of Polish artists Anna Troczyńska, Daria Makarewicz and Morocco-based Ewa Potocka.

“The biggest challenge was the size of the thing,” Potocka told TVP World laughing. “Initially, the mural was supposed to be small – up to seven meters tall. Well, now it stretches 32 meters tall and 17 meters wide, which is 500 square meters of surface.”

“When painting a small mural you can take a step back and easily monitor your progress. If you cannot reach the top, you can mount a paint roller onto a telescopic extension arm and there you go. Here in Morocco, I used bamboo sticks instead,” she said.

“But when the format is so huge, you need a scaffold or a crane. Here we were as if glued to the wall and unable to look at it from afar easily. We had to print the most detailed parts of the design, make holes in the print, collate it to the wall and paint over the holes to bring up the outline,” she said, adding that the print would then be removed to finish up the design.

Ewa Potocka, who lives in Morocco, went on to admit that it had been the first time she painted a mural of this size. “This is why I asked Anna Troczyńska and Daria Makowska for help. She has been painting murals, adverts, all kinds of stuff, for 18 years now.”

“We had delays due to rain but Anna and Daria decided to prolong their stay by a week regardless until December 30,” Ambassador Karwowski said. “Of their own free will they also worked on Christmas Eve.”

Potocka also gave credit to Fes-based Moroccan photographer, culture fixer and artist Omar Chennafi who provided his expertise to make sure the Moroccan thread of the story and Moroccan aesthetics are well represented in the design. “He was the Moroccan voice of the project,” Potocka said.

“The mural was definitely physically challenging,” she said but added that “bystanders were delighted with what they saw.”

“People gave us their blessings,” Potocka recounted referring to a popular Moroccan practice of saying “Allah yubarik fik”, meaning “May God bless you.”

“They, men and women alike, felt a great deal of respect – respect stemming from the fact that only women painted the mural at such a high altitude,” she said. “One lady, a taxi driver, told me the fact the painters were all women proved their resilience and power.”

Morocco is considered a patriarchal society where women struggle for their rights on one hand but also one of the most progressive Muslim countries with regard to gender equality on the other. The feminist movement is strong in the country and enjoys relatively big freedom of operation. Still, Morocco’s rural areas are still governed by traditional gender hierarchies.

The reveal ceremony is scheduled for January 23

The reveal ceremony scheduled for January 23 will take place in front of the Municipal Hall in Kenitra, facing the mural, at 11 am local time. The ceremony will then be moved to a hotel where Ambassador Karwowski will give a speech giving credit to all who contributed to the project.

Paweł Kudzia will then follow with a lecture on Operation Torch and Mieczysław “Rygor” Słowikowski.
source: TVP World