Last but not least, the Group H of the 2022 World Cup in Qatar consists of Portugal, Uruguay, Ghana and South Korea. As it looks as a two-speed competition at first glance, the underdogs have their remarkable qualities to challenge the star-packed favourites.

Fernando Santos is among the managers with the longest work period in the national team. A Euro winner from 2016, Santos made it to Qatar after the playoff stage, when his side saw off Turkey and North Macedonia, luckily avoiding Italy in the decisive match.

After a disappointing performance at 2018 World Cup and Euro 2020, his somewhat satiated squad was reinforced with a fresh blood that is hungry for success.

Portugal will start with their trademark 4-3-3, but will occasionally switch to 4-2-3-1 or 4-4-2 while in possession. They have a lot of attacking players of different characteristics, and, since the same can be said about full backs, their formation can be asymmetric at times. In this context, much will depend on whether Santos deploys Cristiano Ronaldo or not.

In the build-up phase, Portugal is one of the best developed teams in that field. They will use their mobile defenders to create the advantage in a given area, dragging the opposition’s defence block further from their penalty box, which may open the space for fast-paced overlapping fullbacks and wingers.

As the national team relies less and less on Cristiano Ronaldo, for whom the tournament in Qatar will be the “last dance” at the World Cup, a Man City playmaker Bernardo Silva is the general of the Portuguese midfield. The technically gifted Silva regulates the pace of the build-up and can set his teammates up in an unconventional manner.

Portugal’s most creative player in the qualifiers, Bernardo is a trustworthy man of coach Santos. Only Joao Moutinho and Cristiano Ronaldo have played for the national team more times than Bernardo (72 caps), and no other Portuguese has provided more assists during that time than him (24). 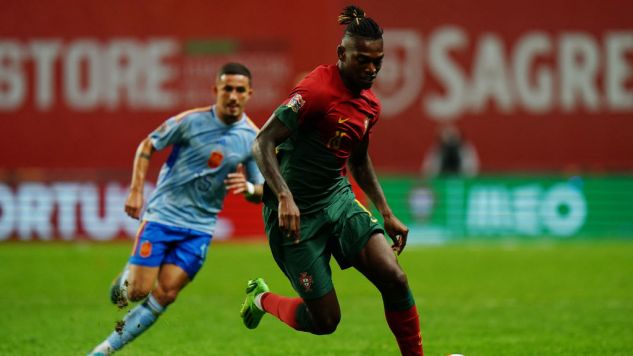 One of the most talented and unpredictable players in the roster, Rafael Leao was named the MVP of the 2021-22 season of Serie A as a vital part of AC Milan which regained the title after years in disarray.

In the national team, Leao usually starts as a left-winger and is more of an inverted, old-style dribbler that can create an advantage on his side of the pitch.

Third place in 1966 remains their best World Cup performance, although they came close to equal it in 2006, but lost to the hosts, Germany. On other occasions, Portugal has been rather disappointing, reaching the Last 16 phase at best.

They are likely to proceed to the knockout phase, but it is vital to do it as the first team in the group. Otherwise, Portugal would most likely get Brazil in the Last 16 phase, which may bring a harsh end to their World Cup hopes.

Diego Alonso is the daredevil who will try to match the big expectations of a small nation after a living legend Oscar Tabarez was fired following a number of disappointing results.

Alonso was named the new coach in December 2021 and immediately made an impact. He won all the four remaining games of the World Cup qualifiers which allowed Uruguay to secure their Qatar spot.

Although they are a South American team, it is believed that Uruguay is the side that plays the most organised, European-like football on the continent. Alonso implements a 4-2-2-2 strategy with false wingers, and, occasionally, 4-2-3-1. They are the team that value speed and efficiency rather than ball possession.

While the 35-year-old Luis Suarez is still invaluable for the national team, which was proven a number of times during the qualifiers, Uruguay has another star that is shining brightly at the top level, that is, Federico Valverde. An extremely versatile player, he is capable of delivering masterclass performances as a central midfielder, winger and wing-back. According to Suarez, Valverde’s box-to-box style reminds him of Steven Gerrard - a Liverpool legend the striker played along with for a couple of years. 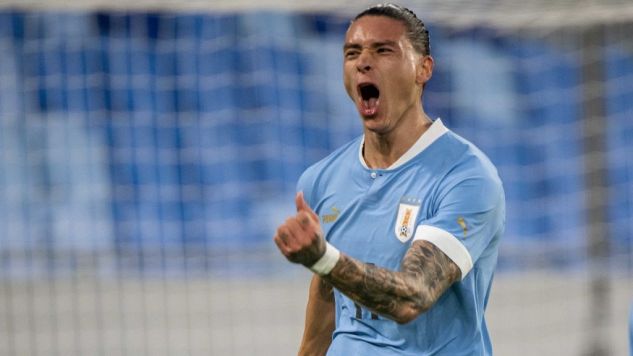 When Darwin Nunez scored in the Community Shield match, the football world set up the stage where he and another Premier League newcomer, Erling Haaland, would battle fiercely for the title of the new best striker in the league.

Yet, the English reality has been brutal for Nunez who was declared “not ready to perform at a satisfactory level” by his coach Jurgen Klopp. During the upcoming World Cup, Nunez, who is expected to start alongside Luis Suarez in the front, will certainly want to remind the world of his extraordinary talent.

Double world champions from “ancient” times (1930, 1950) have come back to the Top 4 in 2010 in a fashion. The team with an attacking trio Cavani-Suarez-Forlan was formidable enough to make the Netherlands and Germany run for their money.

Having renowned names on every position, Uruguay is one of the so-called “dark horses” of the Qatar tournament. Should they overlap Portugal at the top of the group, they can avoid Brazil and have high hopes for another brilliant World Cup.

Coach: A former Ghana international and a midfielder of clubs such as Borussia Dortmund, FSV Mainz and Hamburger SV, Otto Addo took the reins in February 2022 and has managed the team in nine games so far. On his way to finding the best suited formation, his side had its ups and downs, but since their 0:3 defeat to Brazil, Ghana has been looking solid, especially in the recent friendly against Switzerland when they won 2:0 against the favourites.

A defensive one, let’s say. Without the ball, Ghana utilises 4-1-4-1 formation focusing on closing the middle. That opens the space for the opponent’s full backs to move widely and freely, creating an advantage on the sides.

With the ball, Ghana tends to drop a pivot in between the two central backs and move the full backs a bit further, which resembles a 3-3-3-1 formation with a number of possibilities in the build-up phase.

Daniel Amartey has come a long way to rebuild his form just in the perfect time. His club, Leicester, bounced back off the bottom of the English Premier League and won four out of their last six games. Amartey played 90 minutes in each of those matches, keeping a clean sheet in five of them. Capable of playing as a defensive midfielder, he can provide a quality in the build-up and stability while defending. 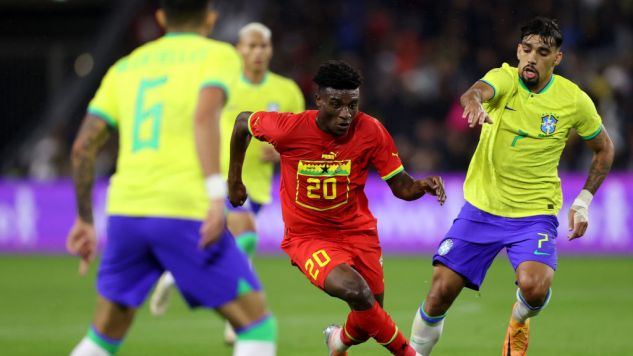 Mohammed Kudus is a skilful midfielder playing for Ajax Amsterdam. The Dutch league aside, the 22-year-old managed to score four goals and record two assists in six Champions League games in a group with Napoli, Liverpool and Rangers.

Kudus can boast with offensive prowess and positional adaptability; if necessary, he can play anywhere in midfield, as a false nine, or even on the wing.

One of the African greatest hopes to break the quarter final curse, Ghana was inches away from reaching the medal zone in 2010. However, the hand ball by Suarez at the goal line gave Uruguay second, and, after Asamoah Gyan hit the crossbar from the penalty spot in extra time, third life. Ghana collapsed in the penalty shootout and experienced their so far biggest heartbreak in World Cup history.

Ghana has seen better generations sent to the World Cup tournament, although this one was reinforced with players who have recently switched allegiance. Even if they manage to fit in the team’s strategy, it will be hard to imagine them battling hard against Portugal and Uruguay - the side they have a score to settle.

The Portuguese Paulo Bento has a World Cup experience both as a player (2002) and a manager (2014). Although his side was shockingly knocked out of the Asian Cup in 2019 already in the quarter finals, the following performances looked decently enough to secure the first spot in the World Cup qualifiers. In total, Bento won 37 games out of 56 as a South Korea manager.

Of the five Asian teams that made it to this World Cup, South Korea had the highest ball possession (66.6%) in the qualifiers. The system preferred by coach Bento is either a double-pivotal 4-2-3-1 or a 4-3-3 with advanced full-backs operating with the ball on the opposition’s half.

Although they can control the ball well and make the opponents chase the ball, they’re not free of flaws in their own box and struggle to create goal chances.

Even though he is currently not in top-notch form, Heung-Min Son is an indisputable star in his homeland, to such an extent that Korean fans wanted the state to relieve him from obligatory military service.

A South Korean captain, the Tottenham striker scored 35 times and recorded 17 assists in 105 games for the national team, including two goals in pre-World Cup friendlies against Cameroon and Costa Rica. Should he be all right after an eye surgery, he could be one of the deadly weapons the Group H outsider can fight back with. 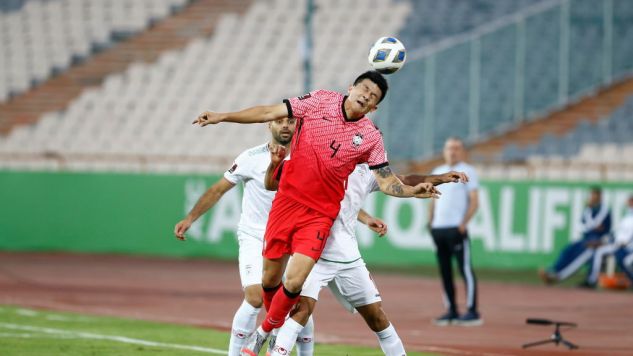 The other weapon in question is Min-Jae Kim. The central-back has become the vital point of Napoli the soon he completed his summer move from Fenerbahce. Just one month after arriving in Serie A, he was named the league’s best player of September and continued performing splendidly throughout the round, contributing to the sensational season Napoli has been enjoying so far. His confidence in aerial duels and clearances go on par with his knack for scoring headers from set pieces.

South Korea has qualified for the World Cup for the 10th time in a row, and 11th in total. So far, they remain the only Asian side to ever reach the semifinal stage of the competition - in 2002, when they co-hosted the tournament with Japan.

The team which has Son in his ranks cannot be underestimated, although anything more than third place in the group will be considered a surprise.