The story behind the current UK immigration crisis

Britain’s Home Secretary, Suella Braverman commented last week: “The British people deserve to know which party is serious about stopping the invasion on our southern coast and which party is not”.

In a parliament session devoted to the UK’s migration policy, Ms Braverman went on to say: “The system is broken. Illegal migration is out of control”. 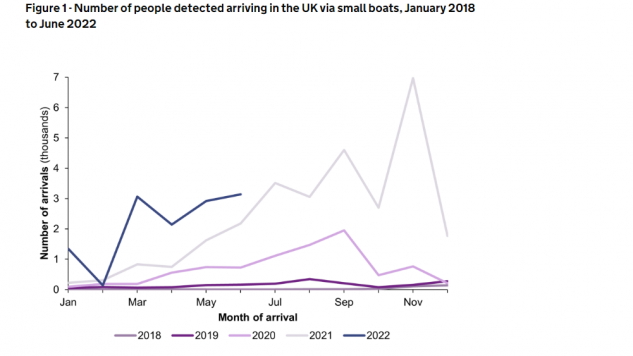 Between January and June this year 2,165 Albanians have crossed in small boats, 2,066 Afghanistani, 1,723 Iranians and 1,573 Iraqi’s. The remaining majority are from various other African nations.

None of the aforementioned countries are currently at war. 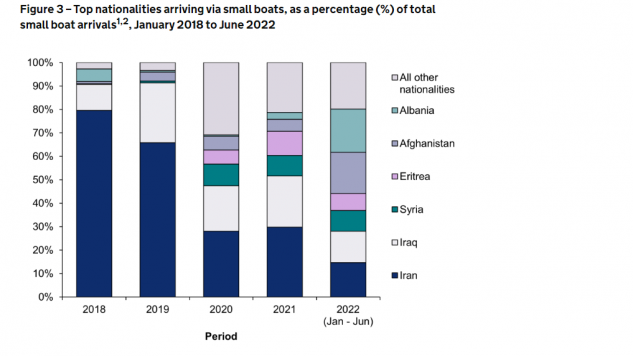 Almost all of the people arriving in small boats claim asylum. In 2022, as many as 93 percent of arrivals have applied for government protection.

From January to June 2022, the UK received over 60,000 asylum claims. Small boat arrivals have accounted for roughly half of these claims.

Of the 6,910 small boat arrivals who have received an initial decision since 2018, 49 percent were granted asylum or another type of leave.

Of those arriving over recent years overall, males represented 87 percent of small boat arrivals in January to June 2022. This was similar to previous years.

Why is illegal immigration “out of control”?

The most commonly reported reason for the increase in numbers is that Albanian gangs have a stranglehold in Northern France and run a better organised operation to send migrants across the channel to Dover, one of the UK’s most south easterly coastal towns.

However, this reasoning only offers a surface level explanation level breakdown of the current predicament. Many commentators have questioned, why is the UK incapable or unwilling to stop the “invasion”?

In early 2019 Serco and Mears won contracts totalling GPB 2.9 bn from the British government to provide accommodation and support for asylum seekers, lifting shares in both outsourcing firms.

Valued at GPB 1.9 bn for Serco and GPB 1 bn for Mears, the 10-year contracts were awarded by Britain’s Home Office Visas and Immigration department under the Asylum Accommodation and Support Services Contract.

Serco has won the contract for the North West of England and the Midlands and East of England regions. In early 2019 it was estimated that about 20,000 asylum seekers were living in those areas.

Serco released an announcement this year stating: “We are looking for landlords, investors and agents with properties available in the North West, Midlands or East of England”.

Serco’s proposal, as stated on their website, is “leases available for 5+ years with no void periods, rent paid in full, on time every month, with no arrears, full repair and maintenance lease excluding latent and structural defects, utilities and Council Tax bills paid by Serco, with no letting or management costs.”

Analysts have speculated on the consequences of Serco’s advertisement, suggesting that landlords are being incentivised to evict their current tenants in favour of the more lucrative and secure deal put forward by Serco.

Experts have pointed out that those most likely affected by these potential evictions would be England’s poorest citizens.

After securing the deal with the British government, Serco released a statement: “In 2020 and thereafter we expect the AASC (Asylum Accommodation and Support Services Contracts) to be materially positive to both profitability and cash flow”.

Given the unfettered, increasing influx of asylum seekers via small boats since 2020, Serco’s prediction would appear to be accurate.
source: Reuters, BBC, Serco, UK government