Antisemitism resurges in Russian media as invasion fails: The Times of Israel

After exhausting excuses for its disastrous military failures in the aggression against Ukraine, Russian media resort to dusting the country’s favourite ancient scapegoat: the Jews. Cnaan Lipshitz of The Times of Israel daily analysed the recent developments in the resurging antisemitism as it permeates the Russian media landscape.

Lipshitz’s “Antisemitism seen seeping into Russian media landscape as Ukraine invasion slows” article was published by The Times of Israel on September 29.

In the article, he notes how the recent resurgence of antisemitic rhetoric in the past two months has obliterated any progress in removing antisemitism from the public discourse that was made over the past 22 years.

Under Putin, open antisemitism has been cracked down upon. Save for a few exceptions, most rulers of the Kremlin have “either encouraged, tolerated or ignored” antisemitism.

Russia invaded Ukraine under the pretence of denazifying the country. But no one of any importance on the international stage took such ludicrous claims seriously. With the exception, perhaps, of the Russian people, who after such a long time of being brainwashed by the state propaganda machine have seemingly lost the ability to think for themselves.

As the article reads, “Putin’s invasion of Ukraine has left him isolated on the world stage, with his claims of Nazis in Ukraine largely dismissed as a fabrication, making a strong stance against antisemitism less useful.”

And as the seemingly inevitable victory of the Russians, who obviously are always the goodies, failed to materialise and Ukraine started to gain the upper hand, Russian propagandists scrambled to find someone to blame the failure on. And they resorted to the oldest trick in the playbook: blaming the Jews.

“At a moment when the regime’s stability was threatened, a Jewish target was selected,” Lipshits quotes Roman Bronfman, a former Israeli lawmaker. “In many ways, this is a repeat of multiple episodes in Russian history, including the final days of Josef Stalin’s time in power.”

Indeed, Stalin’s death likely saved the lives of tens or even hundreds of thousands of Soviet Jews. Not having purged anyone for quite some time, the Red Tsar instigated a new wave of repression justified by the so-called “Doctors’ Plot”, accusing physicians of Jewish origins of plotting to murder the Soviet leadership. 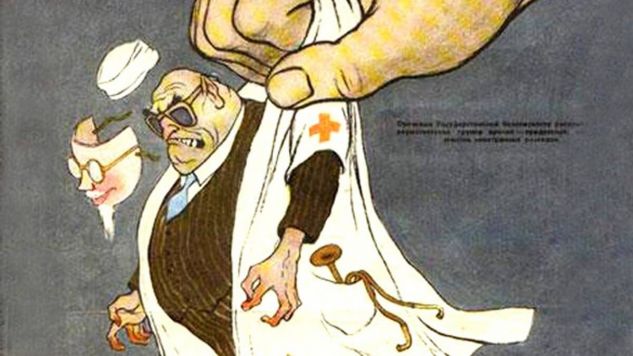 The diminishing devaluation of certain words has always proven the cynicism of politicians and the irresponsibility of the media, but the reckless...

The current situation is a heel-face turn for Putin’s regime. During his time in power, antisemitism has been heavily censured. Lipshitz points to two recent examples of this. A man was jailed for two-and-a-half years for scrawling antisemitic graffiti in 2019, and the police in Krasnodar engaged a rabbi to fake his own death to trap two terror suspects in 2020.

It is hard to tell, whether Putin’s crackdown on antisemitism stemmed from his genuine sympathy for the Jewish people or from principled convictions, it just so happened to work very well with the “denazifcation” of the supposedly traditionally antisemitic Ukrainians talking point that was used to justify the invasion. What is important is that “as Russia’s war machine stalls in Ukraine [...] there are mounting signs that the Putin-era taboos on displays of antisemitism are falling,” writes Lipshitz.

And so, the can was opened, and the antisemitic worms crawled out of it.

‘To vilify Ukraine, the Kremlin resorts to antisemitism’: US Dept of State

To justify the Russian aggression against Ukraine, the Kremlin’s propaganda machine has been peddling a preposterous narrative of ‘denazifying’...

In July, Vladimir Solovyov, a Russian propagandist pundit, himself of Jewish background and always making sure everybody knows it, read the names of Jews whom he believed lacked patriotism on air.

More recently, on September 18 (after the immensely successful surprise Kharkiv counteroffensive carried out by the Ukrainian and after the discovery of mass graves in liberated areas), Moskovskiy Komsomolets daily published an article from Dmitry Popov, its senior writer, listing well-known Jews whom he called “foreign agents”, a term the regime uses to discredit its opponents and judicially persecute them. The Jews might one day form a government in “the beautiful Russia of the future” (i.e. post-Putin), sarcastically mused Popov.

“Antisemitism has returned: Jews are blamed for the ‘beautiful Russia of the future,’” wrote Yulia Kalinina, a former longtime writer at the paper who collaborated with Popov, in an article published recently on the Novye Izvestiya website. Kalinina, who herself has Jewish ancestry, was shocked by the article. Popov’s article was later revised to omit the antisemitic parts of it.

“Russian antisemitism is much older than the Soviet Union. One of the three Russian words that have become an international term, in addition to vodka, is ‘pogrom’,” another collaborator of Moskovskiy Komsomolets anonymously told Novye Izvestiya.

If the Russian media limited themselves to polluting their landscape with antisemitic rhetoric targetting perceived internal enemies, perhaps few would have taken notice. But they also decided to throw some muck at the foreigners who oppose the regime abroad.

Here is what Agnia Krengel, of The Strategic Culture Foundation think tank, wrote of Bernard-Henri Lévy, a prominent French-Jewish journalist, philosopher, and supporter of Ukraine.

Lipshitz describes the language used by Krengel as “reminiscent of the classical antisemitism of the 19th and 20th centuries.”

“This 74-year-old French citizen, born in a family of Algerian Jews, smells blood with his nose and, without delay, flies to lap it up — and for good money,” wrote Krengel of Lévy.

The wording is not merely “reminiscent”, as Lipshitz rather kindly describes it.

It stinks of “The Protocols of the Elders of Zion” and Nazi rags like “Der Stürmer”. 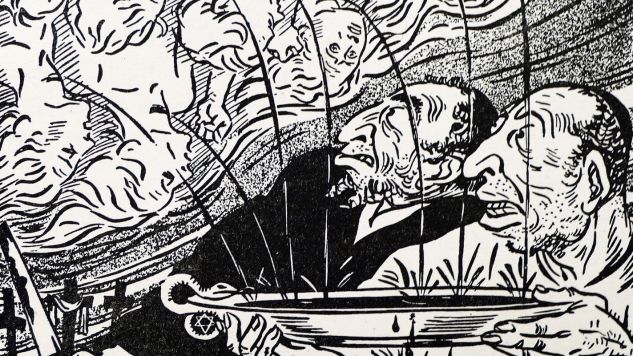 The caption under this cartoon from Der Stürmer read "The Jews are our misfortune". The cartoon itself refers to the blood libel, an old antisemitic canard accusing Jews of ritual slaughter of Christian children to make matzo bread. Please note the parallel with the language used by Agnia Krengel to describe Bernard-Henri Lévy. Photo: Universal History Archive/Universal Images Group via Getty Images

For months, Rabbi Hillel Cohen has delivered spiritual assistance to Jews (as well as gentiles) serving in the Ukrainian Armed Forces. Rav Cohen...

“The uptick in antisemitism adds to the forces that have caused tens of thousands of Russian Jews to leave their country since Putin invaded Ukraine,” writes Lipshitz. According to the data quoted by him, about 15 percent of Russia’s Jewish population (20,000 people), have left Russia for Israel in 2022 ALONE.

The exodus of the Jews is likely going to gain pace after the mobilisation announced by Putin on September 22, and Israeli authorities are reportedly preparing for it. This, in turn, will likely feedback into the perception of Jews as unpatriotic.

“Already, Russian media has noted that Chabad of Russia has appeared to speak of the war critically at a time when all other prominent clerics of state-recognized faiths have endorsed it,” writes Lipshitz. “Meanwhile, reports have noted that multiple highly-visible Jewish oligarchs — including Roman Abramovich, Viktor Vekselberg and Michael Friedman — have left Russia since the war began.”

As the aforementioned Roman Bronfman said, this “led to an optic of Jews abandoning ship when the going gets hard”. But he also says that he doubts the resurgent antisemitism is a move ordered by Putin himself. Rather, it reflects “the zeitgeist at a time when ordinary Russians are experiencing privations and even danger because of Putin’s war in Ukraine.”

“These are matters of a general atmosphere,” Lipshitz quotes Bronfman. “Officials and the general population are reading between the lines on how they should treat the Jews. And the message is changing,” concludes Bronfman, and Lipshitz’s article.

source: The Times of Israel