New Orleans becomes murder capital of US as homicides surge

New Orleans, plagued by low police staffing levels and morale, saw 41 murders per 100,000 people in the first six months of the year, a 141 pct. increase over 2019, according to an analysis by the Wall Street Journal. The murder rate is nearly four times that of Chicago and nearly 20 times the rate in New York City.

Violent crimes statistics have flattened in much of the country following the slowdown of the pandemic crime surge this year, however the numbers have continued to rise in several cities including Dallas, Phoenix and New Orlean.

In an interview with the Wall Street Journal, the New Orleans Police Superintendent Shaun Ferguson stated that the criminals are becoming “more bolder and brazen” and that the criminals “do not believe they will face any consequences for their actions.”

The Journal broke down numbers provided by the Major Cities Chiefs Association and the city’s own Metropolitan Crime Commission. In addition to homicides, shootings are up 100 pct. over 2019 numbers; carjackings have spiked 210pct. and armed robberies have risen 25 pct., data shows. The 2019 numbers are from the FBI’s most recent Uniform Crime Report. 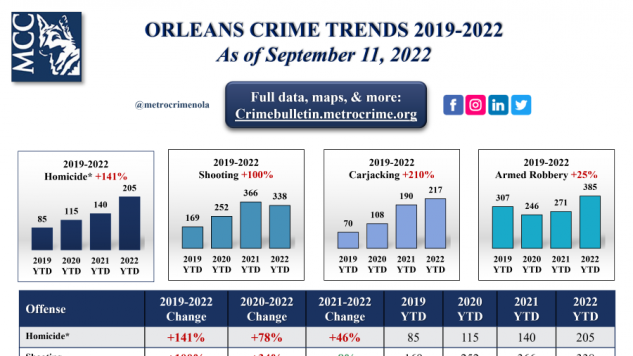 In New Orleans, the homicide rate has soared 141 percent compared with 2019, while shootings are up 100 percent, carjackings up 210 percent and armed robberies up 25 percent

Although New Orleans spends USD 570 per resident on its police budget, second only to New York City, it is nonetheless plagued by staffing problems, according to the Journal. The force is now under 1,000 officers for the first time in decades, and down by a third from just a few years ago.

New Orleans Mayor LaToya Cantrell blames a consent decree put in place in 2013 following several racially charged police incidents that allows the Justice Department to watch over the department. She said it makes it hard for cops to do their job and difficult for the department to recruit new officers.

“You cannot operate a department that’s made for roughly 1,400 officers when it has less than a thousand,” Moreno said at a city council meeting, according to WWL-TV.