Tears in rain: Vangelis passes away at the age of 79

The saddening news was confirmed on Thursday by the Athens News Agency. Other Greek media reported that Vangelis died in a French hospital on Wednesday. Vangelis’ lawyers provided no cause of the artist’s death.

“Vangelis Papathanassiou is no longer among us,” Greek Prime Minister Kyriakos Mitsotakis said in a tweet on Thursday while other government officials joined him in the expression of condolences and grief.

Born Evangelos Odysseas Papathanassiou in 1943 in Volos, he is best known for his exhilarating electronic theme for the Oscar-winning “Chariots of Fire”, deemed one of the best-known film scores of the 1980s.

From his youngest years, Vangelis developed an interest in music and experimenting with sounds produced by banging pots and pans or fixing nails, glasses and other objects to the strings of his parents’ piano. It is in his mind and from under his fingers that a marriage of Greek folk songs and Orthodox Christian choral music emerged forming a unique and, as it later turned out, eternal bond. All of this without any formal musical training, which he later said had helped save his sense of creativity.

Vangelis began his career with local rock bands. But the 1967 coup that installed a military junta in Greece forced him and many other young artists abroad. Vangelis found refuge in Paris, where he became enthralled by the then cutting-edge field of electronic synthesisers. Having explored the new horizon, he learned to create musical compositions that seemed composed of spots of colourful sound slowly pouring out onto the listener from a bottomless depth of silence.

Although he achieved some recognition in Europe, Vangelis retreated to his self-made London studio to write the score for “Chariots of Fire,” which tells the story of the triumph of a group of British runners at the 1924 Olympic Games. Beaming with synthesiser beats and moving melody, the score plays to the now-classic opening scene shot at West Sands Beach, St. Andrews, Fife, Scotland, UK. As Vangelis revealed after having received an Academy Award, the composition was in part a tribute to his father – a keen amateur runner. Although the score topped the charts for weeks, the Greek was somewhat dismissive of the enormous popularity it enjoyed. “It’s only another piece of music,” he told an interviewer. 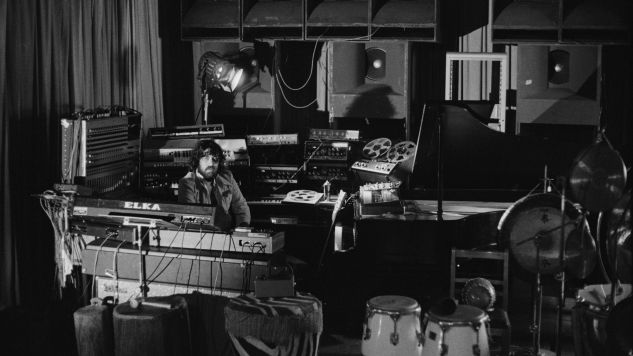 While the “Chariots of Fire” became his most recognised track worldwide, they also overshadowed his other scores. In Poland, for instance, “Conquest of Paradise” from “1492: Conquest of Paradise (1992)” was awarded a gold record.

One could not forget his powerful score for Oliver Stone’s “Alexander”, regardless of the film’s reception.

Vangelis’ “Tears in Rain” was described by critic Mark Rowlands as "perhaps the most moving death soliloquy in cinematic history," referring to the culminating scene in Ridley Scott’s “Blade Runner” where Roy Batty, played by Rutger Hauer, spells a 42-word monologue in streaming rain.

Batty, a replicant android chased down by Rick Deckard, portrayed by Harrison Ford, spares Deckard, pulling him to safety at the last moment. But then the finitude of his own lifespan and the fact that it is about to terminate dawns upon Batty. The realisation frees the android into a reflection on his own experiences and mortality.

“I've seen things you people wouldn't believe... Attack ships on fire off the shoulder of Orion... I watched C-beams glitter in the dark near the Tannhäuser Gate. All those moments will be lost in time, like tears in rain... Time to die,” says the android.

Although fans were left tearful by the composer’s passing, surely his artistic legacy will not be lost to the crashing waves of time. On the contrary, it will remain as evidence of the conquest of paradise.
source: ekathimerini.com, TVP World