Ebru, also known as paper marbling, is the Turkish tradition of painting on water. TVP World’s Aleksandra Marchewicz was in the Turkish Embassy in Poland reporting on this unique cultural heritage element.

Ebru painting is a distinctive genre of aqueous art used to produce mesmerising works. This special form of art has been listed as a UNESCO World Intangible Cultural Heritage since 2014.

#Ebru, #Turkish art of marbling is now added to the @UNESCO's list of #IntangibleHeritage pic.twitter.com/yk7XFEZHVD

“Ebru is the traditional Turkish art of creating colourful patterns by sprinkling and brushing colour pigments onto a pan of oily water and then transferring the patterns to paper,” the UNESCO Intangible Cultural Heritage website states.

“First, the artist mixes water with pigment and kitre, a natural gum, to produce a dye. The dye is then added to the surface of the size, a cellulose solution, and an awl is used to manipulate the colours into designs and patterns,” Turkish artist, Suna Koçal said.

The first forms of Ebru emerged in the 13th century, in Central Asia and spread throughout Anatolia. During the Ottoman period, Turkish calligraphers and artists created new forms and perfected techniques. It is a way of promoting Turkish history, culture and traditions. 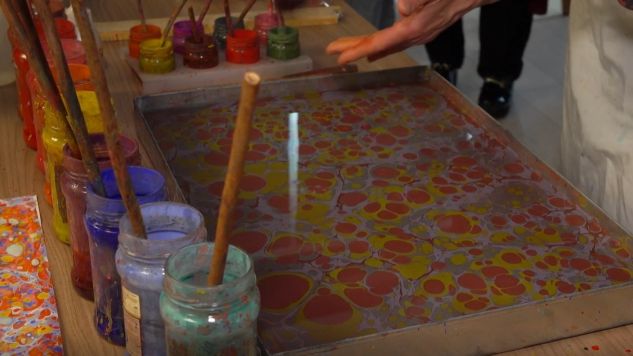 “Ebru artists play a crucial role for the practice and transmission of the element. They have the responsibility of transmitting their specialised knowledge from one generation to another mainly within the master and apprentice relationship,” the Turkish artist added.

Suna Koçal was included in the Guinness Book of World Records in 2013 when she and a group of Ebru artists produced the largest ebru painting in Turkey.