The Eurovision Song Contest is a celebration of music and of friendly competition between the peoples of Europe. But to believe it does not have political implications would be naive.

The Eurovision Song Contest is officially about music, and the event has produced some beloved songs over the decades. The more important aspect is to bring the peoples of Europe in a joint celebration of music in the spirit of a friendly competition. But Eurovision is also about politics, and this can be clearly seen every year when voting patterns are looked into.

Nations that enjoy friendly relations or cultural proximity tend to vote for one another. Nations that are at odds, do not. In an attempt to mitigate that, votes are allocated in part by televote, and in part by the jury, which are supposed to, in theory at least, be more impartial than the general public. To what extent this works, can be debated. But following this year’s Eurovision, the votes by national juries have become subject to controversy.

Immediately after midnight CEST, when the votes of national juries began to be announced, EBU published a statement on the Eurovision’s website, stating that “certain irregular voting patterns were identified in the results of six countries.” The country’s affected were Azerbaijan, Montenegro, Georgia, Romania, San Marino, and Poland. Instead of the votes of the jury, the officially announced results were “calculated based on the results of other countries with similar voting records”.

Of those countries, four gave the maximum of 12 points to Ukraine. Azeri and Georgian national broadcasters have confirmed that their 12 points would have gone to Ukraine anyway, and Romanian broadcasters said they awarded Ukraine 10 points, with 12 having supposed to have gone to Moldova, with whom Romania shares close historical and linguistic ties. The actual votes by those country’s juries probably would not have affected Ukraine’s chance to win, and the televotes in various countries overwhelmingly favoured Ukraine anyway. The fact that the EBU decided to interfere with the voting process of the national juries based on their suspicions of the juries being somehow partial (how that was established is unclear) remains. Azerbaijan, Georgia, Romania, and Montenegro requested a clarification from the EBU.

What probably surprised Polish viewers the most, was the vote of the Ukrainian jurors, as Poland’s Krystian Ochman had not received a single point from them. There were other countries which had not awarded the Polish contestant any votes, so it could be said that the five members of the jury did not see much merit in the Pole’s performance. But in Poland this was poorly received, with social media soon thereafter erupting with outrage over the perceived ingratitude of Ukrainians, considering the massive support for Ukraine in the face of Russian invasion and the number of refugees that found a safehaven in Poland.

The voting system may confuse some people, since so much is made of the jury vote: each country is connected with separately, and each of the 40 EBU members is given up to about a minute to reveal their favourites. But the televotes from all countries are announced within a much shorter time span for each of the contestants. And the Ukrainian televote awarded 12 points to Poland.

If the Poles thought they were outraged, they should see how the Ukrainians reacted to their jurors’ votes.

Ukrainian social media erupted into a frenzy lambasting the jury’s decision. Ukrainian Internet users even began posting abuses against the jurors, to the point that Vadym Lysytsia, the head of the jury, blocked the possibility to post comments on his public profile. He also issued an apology:

“I apologise to the Polish people for what happened, but there is nothing I can do, because this is a principled position. And everything is done honestly. All our and my love, which is directed to the Polish people for their great help, was expressed in 12 points from the audience. I emphasise that we worked strictly according to the regulations. We saw the results of the vote together with everyone at night. And for us it was also a surprise,” said the chairman of the jury.

Iryna Fedyshyn, one of the members of the jury, was also surprised. On her Instagram profile she posted a picture of her voting card, which she had done in breach of the rules under which the voting is to be conducted. She herself gave Poland 10 votes.

The average Ukrainian Internet user’s feeling were pretty accurately summarised by Andriy Bondar, a writer, who wrote a Facebook post with an apology to Poland promised retribution:

"We are now collectively breaking their [public] images and career," wrote Bondar, followed by a smiley face. And as the eloquent man of letter he is, he added that "no excuses will stop the zealous and fervent ***-whooping that is currently underway." 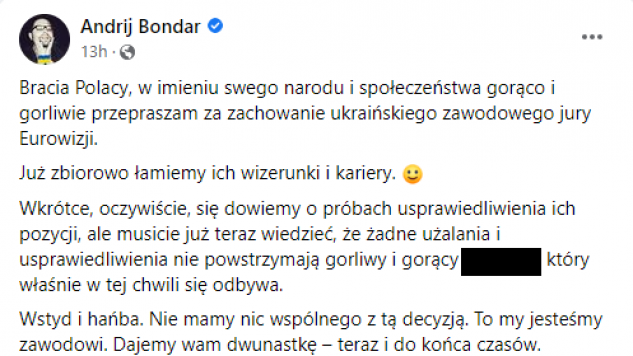 If being a target of a massive online “***-whooping” sounds bad, imagine facing criticism from government members. Oleksandr Tkachenko, Ukraine’s Minister of Culture and Information Policy got involved. In a Facebook post he also apologised to Poland, as well as Lithuania, who is also very supportive of Ukraine and likewise received no points from the Ukrainian jury. In his personal opinion “[th]is assessment in no way reflects our real attitude to you, to our closest friends in Europe.” While he said that the British, who came in second and received the 12 jury points from Ukraine, were a tough competition and they deserved recognition for it, giving no points to Poland or Lithuania was shameful. Minister Tkachuk stressed the Ukrainian televote results and thanked both nations for their support, concluding that “although the competition is not political, it is not politics - it is friendship, it is common values, it is comprehensive support in all areas. And I hope it's all for many, many years. Dear Polish and Lithuanian peoples, we are infinitely grateful to you, our victory is common. Both at Eurovision and the one that will be above the enemy.”

And then, Ruslan Stefanchuk, the speaker of the Ukrainian parliament got involved:

Thoughts after #Eurovision
Ukrainians give 12 points to our Polish brothers.
The Ukrainian professional jury gives the Poles zero.
How far they are from the people.
P.S. I sincerely hope that PBCU will take the time to explain this discrepancy.
����❤️���� pic.twitter.com/xjxs9PBd0k

President Volodymyr Zelenskyy is probably too busy to get involved himself. Let us just hope that Mr Lysytsia does not get an early morning visit from the gentlemen flashing badges of the Security Service of Ukraine (SBU).

Several Italian websites belonging to public institutions were targeted by a pro-Russian hacker group Killnet earlier in the week. It was revealed that Eurovision's website was also a target of the attack, but these were unsuccessful and did not affect the televoting process, which was the likeliest goal of the hackers.

But as Svitlana Maistruk, a Euromaidan activist revealed during an interview she gave as a guest of the May 15 instalment of TVP World’s World News, the Ukrainian Eurovision voting body has long been accused of corruption, with Lysytsia himself being under investigation, and reportedly receiving bribes from Russia. The reason she gave for this is the impact of the Eurovision as a tool of cultural “soft power”. Perhaps a visit from the SBU fuzz does await Mr Lysytsia after all.

The entire interview can be watched on our website.