There was a consensus on Saturday among G7 foreign ministers that Russia should cover rebuilding costs in Ukraine.

French, Japanese, German, US, UK, Italian and Candian FMs said during the G7 meeting in northern Germany that Russia should cover the costs of rebuilding Ukraine destroyed by the Russian invasion.

​"It is fundamental that the reconstruction of Ukraine be funded by the perpetrators of this war . There's a lot of interest on the part of G7 members. We've definitely had the conversation about this. The US is already following suit on this as their Congress is discussing about it, but also the European Union is very interested as well," Canadian FM Melanie Joly said.

She went on to say Canada would be spearheading the issue of landmines in Ukraine. "Families cannot go back to their homes or go back, and kids cannot go back to parks or playgrounds because there are so many land mines across the country," Ms Joly said.

Canada has announced support to map landmines across Ukraine and educate the population.

Ms Joly reiterated the German stance, saying that Russia could not impose a dictated peace. The Candian FM said any decisions about a settlement between Ukraine and Russia would depend on the Ukrainian government. To recall, Ukrainian officials have repeatedly accused Russia of war crimes. Those accusations have been, in turn, doggedly denied by Moscow, which, since it launched the invasion on February 24, has refused to acknowledge targeting civilians. 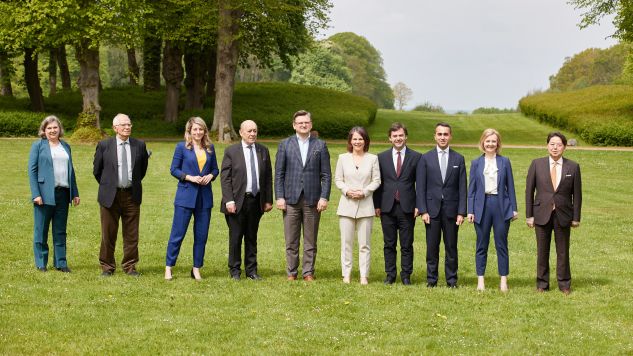 Ms Joly offered Canada’s expertise on food security. "We have a lot of knowledge and expertise in grain growing and grain shipping, and we will make sure to free Ukrainian wheat."

Meanwhile, the global food situation was made more complex when India announced on Saturday its ban on wheat exports designed to check unregulated trade.

Speaking just hours after the ban had entered into force, Indian government officials stressed there was no dramatic fall in wheat output this year but unregulated exports had led to a rise in local prices.

"We don't want wheat trade to happen in an unregulated manner or hoarding to happen," a senior government official told reporters in New Delhi on Saturday.

New Delhi said it would still allow exports backed by already issued letters of credit and to countries that request supplies "to meet their food security needs".

Buyers worldwide were stocking up on wheat from India, the world's second-biggest wheat producer, after exports from the Black Sea region slid following Russia's invasion of Ukraine. India had aimed to ship a record 10 million tonnes this year before the ban was effectuated.
source: Reuters