Elected on Saturday, Sheikh Mohammed bin Zayed Al Nahyan, colloquially called MBZ, has been recognised as the driving force behind the UAE's interventionist foreign policy and a supporter of Yemen's internationally recognized government backed by the Saudi-led coalition that intervened in Yemen, with the consent of the West, to drive out Iran-backed Houthi militants.

It is with great regret and sorrow that we learned of the passing of the President of the UAE, His Highness Sheikh Khalifa Bin Zayed Al Nahyan. We join the Emirati nation in mourning over the great Leader and Visionary. pic.twitter.com/EVi9g4DwAS

Relations with the US and Russia

Over the years Al Nahyan regarded the US as his chief ally. This was to a certain extent undermined when the Obama administration did not ask the UAE for their opinion on the Iran nuclear deal. However, with the advent of the Trump administration, Al Nahyan’s regard for the US greatly improved, as both the then-POTUS and the Abu Dhabi Crown Prince shared similar ideas with Donald Trump on Iran and the Muslim Brotherhood, which the White House opposed.

Nevertheless, Al Nahyan has maintained close relations with Russia’s strongman Vladimir Putin. Memorably, MBZ brokered talks between Russia and the Trump Administration. It surfaced in 2016 that Al Nahyan was involved in the Russian meddling in the US presidential elections, where his adviser George Nader set up a meeting for him and Saudi Crown Prince Mohammed bin Salman in Seychelles with the US and Russian delegates, including Erik Prince and Kirill Dmitriev. At a point, The New York Times dubbed MBZ the Arab World’s “most powerful ruler” due to his capacity to collaborate with Russia and the US at the same time.

For his part, Russia’s Putin calls Al Nahyan an “old friend”, "a big friend of Russia". Putin and Al Nahyan talk with each other on the phone regularly. As the first weeks into the Russian invasion of Ukraine showed, Putin called MBZ “a friend” for a reason, as the now UAE President has been refusing to take phone calls with US President Joe Biden seeking to build international support for Ukraine and encourage greater oil production to contain a surge in oil prices.

A successor to a pro-Western moderniser

MBZ succeeded Sheikh Khalifa Bin Zayed Al Nahyan, a pro-Western moderniser who had aligned the Gulf Arab state closer to the US and its allies. Sheikh Khalifa was laid to rest on Friday in Abu Dhabi. The Ministry of Presidential Affairs announced the death of Khalifa on Friday but provided no details on the circumstances of his demise. He was buried wrapped in a UAE flag at Al Bateen cemetery after officials and family members held prayers.

On the demise of the president of the state, HH sheikh Khalifa Bin Zayed Al-Nahyan, the Ministry of Foreign Affairs of Poland offers the deepest condolences to the nation and authorities of the United Arab Emirates 🇦🇪.

The heartfelt sympathy to the Family of the Deceased.

"The UAE has lost its righteous son and leader of the 'empowerment phase' and guardian of its blessed journey," MBZ said on Twitter, praising Khalifa's wisdom and generosity.

Jill and I were deeply saddened to learn of the passing of His Highness Sheikh Khalifa bin Zayed al Nahyan. Sheikh Khalifa was a true partner and friend of the United States, and we will honor his memory by continuing to strengthen ties with the government and people of the UAE. pic.twitter.com/omGVQ7DzFd

Born in 1948, Khalifa had rarely been seen in public since suffering a stroke in 2014. It is also then that MBZ took most of his half-brother's tasks on his shoulders as the de facto ruler of the UAE, an OPEC oil producer and a major trade and tourism hub which has moved to build its political influence in the region and abroad.

The Queen has sent a message of condolence following the passing of His Highness Sheikh Khalifa bin Zayed Al Nahyan, President of the United Arab Emirates and Ruler of Abu Dhabi:

The UAE announced a 40-day mourning period with flags flown at half-mast and suspended work at all public and private sector organizations for three days.

I offer my condolences to the people of the UAE on the passing of Sheikh Khalifa.⁰
The Sheikh devoted his life to his country, working for the welfare and future of the Emirates.

With him, the UAE became prosperous, tolerant and open to the world. His legacy will live on.

I am deeply saddened to know about the passing away of HH Sheikh Khalifa bin Zayed. He was a great statesman and visonary leader under whom India-UAE relations prospered. The heartfelt condolences of the people of India are with the people of UAE. May his soul rest in peace.

Deepest condolences on the passing of His Highness Sheikh Khalifa bin Zayed Al Nahyan. His loving leadership, service and dedication to the United Arab Emirates and its people will forever be remembered. -Sghttps://t.co/CgttzU3vY5

Born on March 11, 1961, in what was then called by the British the Trucial States, a group of tribal confederations in southeastern Arabia whose leaders had signed protective treaties with the UK between 1820 and 1892, Mohamed bin Zayed is the third son of Zayed bin Sultan Al Nahyan, the first President of the UAE and Ruler of Abu Dhabi.

Abhorring the idea of his son being spoiled by luxuries, Sheikh Zayed, in a preventive move, sent him to the Royal Academy in Rabat at the age of 10 where the young emir was to pursue knowledge. Interestingly enough, his classmate was the future King of Morocco Mohammed VI. Whether the heir to the Alawite throne knew whom he was dealing with remains unknown as Mohammed bin Zayed was given a passport with an altered last name because his father did not want him to be treated like royalty. To Sheikh Zayed’s mind, the whole enterprise was to hone and discipline his son.

Allegedly, the young Al Nahyan spent several months working as a waiter in a local restaurant. Taught to be self-reliant, he made his own meals and did his own laundry. He often experienced loneliness. “There’d be a bowl of tabbouleh in the fridge, and I’d keep eating from it day after day until a kind of fungus formed on the top," is how Al Nahyan described his life back then to the New York Times. 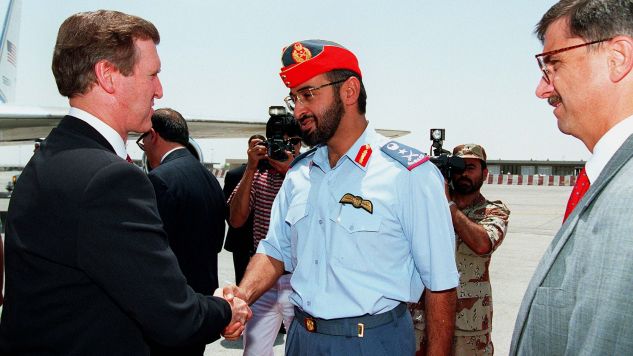 He continued his education in Al Ain, Abu Dhabi and at Gordonstoun School, Scotland, until the age of 18. In 1979, he joined the Royal Military Academy Sandhurst where he received a comprehensive military course including flying and parachuting.

The princeling, as a young military officer, went on holiday in Tanzania in the 1980s, where he met the Masai people and saw their customs and the scope of poverty in the country. Following his return to the UAE, as Al Nahyan recounts himself, his father Sheikh Zayed asked him what he had done to help the people he had encountered. Having shrugged, Al Nahyan replied that he had done nothing as the people he met had not been Muslims. “He clutched my arm, and looked into my eyes very harshly. He said, ‘We are all God’s creatures’.”, Al Nahyan said.