‘They are lying to us’: father of deceased Russian sailor

A man from the Russian-occupied Crimea, felt proud that his son was serving in the Russian Navy. However, he came to realise the brutal truth of the ongoing conflict when his son’s ship, the Moskva, was sunk.

Several hours after midnight, on April 15, Dmitry Shkrebets, posted a picture of himself and his son, Yegor, on the Russian vKontakte social network.

“A country such as Ukraine should not exist. It is Russian land inhabited by people who have forgotten that they are Russian,” he wrote in a comment under the post.

Shkrebets may not have realised when he was writing that comment that his son was already dead. 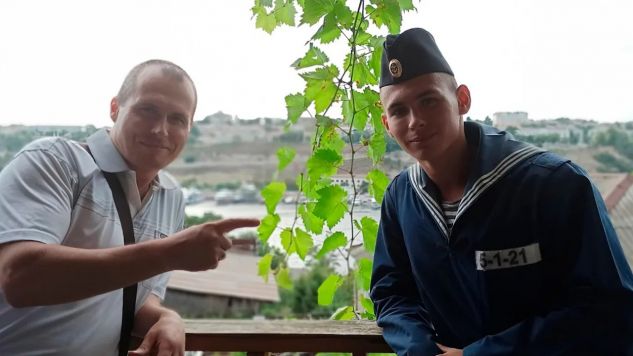 Due to the Putin regime’s tight grip on the media, Russian citizens are almost entirely denied access to any credible information as to what is going on in Ukraine. The soldiers’ families often do not realise that their children, brothers, and fathers were sent to fight in a war of invasion against their neighbouring country.

The Russian Ministry of Defence initially claimed that a fire broke out on the ship but was contained by the crew. Later they admitted that the ship had sunk, reportedly while being towed to its homebase in Sevastopol, but that the ship’s entire crew had been evacuated. All these claims were false.

“[My son] served as the ship’s cook. [...] The official announcement by the Ministry of Defence said there was a fire on board of the ship and that there was an ammunition explosion. They said the entire crew was evacuated.

Moskva was struck by anti-ship missiles launched by Ukrainian defenders, causing an explosion in the ship’s ammunition storage. According to most independent reports, the majority of Moskva’s crew perished either during the explosion, or in the waters of the Black Sea.

Yegor Shkrebets was a draftee performing his compulsory military service. Draftees are not supposed to be sent into combat zones, they are not supposed to go to war. However, according to the official line by the Kremlin, there is no war in Ukraine, only a “special military operation”. Russian citizens who attempt to claim otherwise, face up to 15 years of imprisonment for “spreading disinformation”.

Yegor Shkrebets is not on any list of dead or wounded. He is officially listed as “Missing in Action”. But Dmitry Shkrebets was quick to realise that this was not true. He tried to make inquiries about the fate of his son, but military officials simply ignored him. The lack of response led him to bluntly ask, “why are you, officers, alive, and my son, a draftee, is dead?”

“Think for yourselves,” he stated and requested the readers of his message to spread it far and wide. He also appealed to them to take care of their children and of one another.

“I, Dmitriy Ivanovich Shkrebets, father of the draftee Yegor Dmitrievich Skrebets, [...] will dedicate the rest of my life to make sure that the truth about what happened prevails. A man from whom his son was so viciously taken away, has nothing left to fear in this world!”