“We do not know how far Vladimir Putin will go. However, we all know what he is capable of”, the Polish Prime Minister, Mateusz Morawiecki said in an interview given to a Spanish daily, “El Mundo”.

The moment of truth in relations with Germany has arrived: Ukrainian FM

A moment of truth has come in relations between Ukraine and Germany, according to Kyiv’s Foreign Ministry head, Dmytro Kuleba quoted by the...

The Polish PM mentioned not only Russia’s economic pressure and the energy supply blackmail that Europe has been experiencing recently, but also the earlier invasions of Georgia and Crimea. “These are clear proofs that Russia is prepared to break the rules of international relations. Even more so, it is clear to me that the EU and NATO must do everything to prevent any subsequent aggressive steps by Vladimir Putin,” emphasised Mateusz Morawiecki.

“Are we supposed to watch from the sidelines while Vladimir Putin annexes Ukraine? I do not expect Germany to engage in the conflict, if this is the decision of its new government. However, I do think that Germany, by doing so, is making a great mistake. If they are refusing to help Ukraine, I would like to ask them to state it clearly. Evasive statements, such as ‘we are not sending weapons to Ukraine, because it is a conflict zone’ do not sound serious enough in the current conditions,” said the Polish Prime Minister.

Mr Morawiecki recalled the words of the late President Lech Kaczyński, who flew to Georgia in 2008, on the 5th day of the Russia-Georgia conflict and gave a speech during a rally in Tbilisi. At the time, Mr Kaczyński said: “Today, it is Georgia, tomorrow Ukraine, the day after tomorrow the Baltic countries, and then perhaps that time will come for my country, Poland.” These words seem very poignant, yet prophetic nowadays. 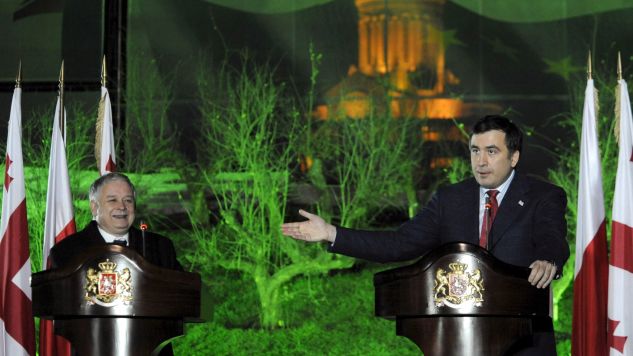 According to the Polish prime minister, Putin's goal is to see how far he can go as he has already taken advantage of the lack of European unity and crossed other borders.

“As it is Putin's dream to rebuild Russia's imperial strength, we should halt its implementation,” Morawiecki said, adding that, if carried out, it would become "a nightmare" for all of us.

Mateusz Morawiecki emphasised that Russia’s neighbours have the right to be independent and sovereign states.

“Our only demand is for Russia to respect the right of nations to self-determination. The Ukrainian people deserve this just like the Russian nation,” Morawiecki said, adding that both Ukraine and Georgia were fully entitled to take independent decisions regarding their states.

The Prime Minister added that “it is obvious that Poland will offer Ukraine its support, which will be appropriate to the threat.”

He also reminded that “since 2015, Poland has issued the largest number of residence permits to immigrants, among all 27 EU countries. Since the annexation of Crimea, Poland has become a home for over one million Ukrainians, who were forced to leave their country due to Russia’s aggressive politics. Poland has also become a safe place for thousands of Belarussians seeking asylum from persecution by Lukashenka’s regime. Everyone, who in a legal way wants to make Poland his or her home, may count on our help,” concluded Mr Morawiecki.

Russia has already deployed around 100,000 troops on its border with Ukraine, prompting fears that it intends to invade its western neighbour. According to military experts, there is a real threat of Russian aggression.