The European Commission (EC) recently announced that it does not intend to help Poland finance the barrier being built on the country’s border with Belarus. Meanwhile, the barrier at the Spanish coast that has been helping the country protect its borders from illegal migrants since 1993, was, according to a report, funded in more than 70 percent by EU money.

“In Vox, we understand that a reinforced and secure border is a guarantee of stopping the illegal migration,” Juan Sergio Redondo, the leader of Vox (Spanish conservative party) in the Assembly of Ceuta, said, commenting on the matter for Rock Rachon.

“Poland has to act in a determined way,” he said, stressing that “the third countries cannot blackmail the country with illegal migration.”

“It is necessary for Poland to reinforce the border to avoid massive illegal crossings,” Mr Redondo emphasised. 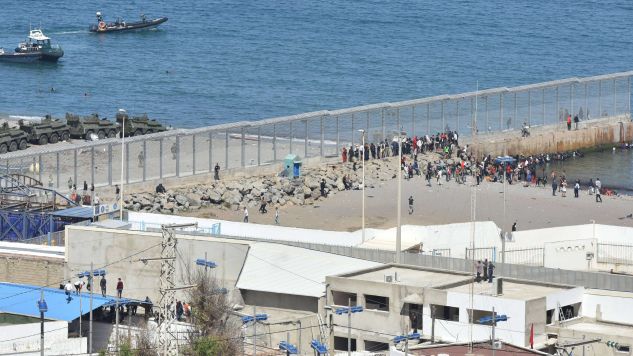 “No-go zones” in the EU cities

Rock Rachon’s second part concerned the so-called “no-go zones” (places where police enter only using armoured vehicles) in many European cities and denying their existence by the EU.

Francisco Ruis, a security expert and the programme’s second guest, pointed to Il Principe (a working-class neighbourhood inhabited mostly by Muslims) in Ceuta, a Spanish autonomous city on the north coast of Africa, as one of the examples of such zones.

“The Police have problems with getting inside [the district], single patrols cannot get inside because they can get hurt, shot and be thrown rocks at,” he said.

“When there is no authority, people do whatever they want,” Mr Ruis pointed out.

The programme’s third guest was Matthew Tyrmand who is a Polish-American economist, publicist and social activist, writing for “Do Rzeczy” and “Wprost” weeklies.
source: TVP World