The white and red flag once again flutters over Antarctica as Polish scientists make their great return to the Dobrowolski Station after their last departure in 1979.

For over half a century the station was out of use. The reason? A dearth of financial resources.

The idea to resume research in the station came from Professor Marek Lewandowski.

Favourable weather conditions made a phone call with the genuinely otherworldly place possible.

“A truly Martian landscape… completely devoid of any human presence, the simplest form of a desert there is. Nothing lives here,” professor Marek Lewandowski of the Geophysics Institute of the Polish Academy of Sciences has said.

No sign of life apart from penguins, which every now and then pay a visit to the Polish base. However, for scientific research purposes, these are perfect conditions because, as professor Lewandowski’s colleague Dagmara Bożek said: “This spot is not covered with a continental glacier which means we can without any problems set up equipment here and conduct further studies and there are very few places like this one.” 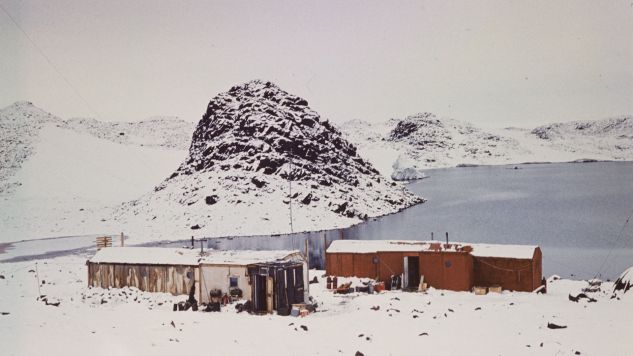 Poles return to the Dobrowolski Station after their last departure in 1979. Photo: PAN

Even the trip itself turned out to be quite a challenge and took over two months. The scientists began their journey at the Bremer-haven harbour in Germany.

The icebreaker made it to South Africa on December 1, 2021. Five days later it set its course towards Antarctica. Polish scientists spent the end of the year and New Year’s Eve at the Russian Mirny station. With the arrival of the new year, they embarked on a journey through the Mason Sea and from there, they boarded the icebreaker Shackleton and then travelled by helicopter over the final 100km to the Bunger Oasis.

And on the way a number of surprises awaited them.

“These are some of the most dangerous parts of the sea in the world, due to capricious weather,” Ms Bożek said.

The fourth geophysical expedition is collecting data needed for geological and geochemical research. However, it is not the main reason for the expedition.

Professor Lewandowski said: “We intend to install automated stations which will work here year-round and deliver data to our institute and to all parties interested.”

The expedition is supposed to last at least a month-and-a-half but new astronomical plans are emerging.

“It’s an analogical environment to the one found on Mars. Maybe we will begin training for people who would one day make their way to Mars,” said professor Krzysztof Otto, Polar and Technical Director of the Geophysics Institute of the Polish Academy of Sciences.

For now, we remain firmly on planet Earth. Therefore, we would like to share an important piece of news, via prof. Marek Lewandowski: “Science is back at the Dobrowolski station!” ... and this only marks the beginning of the scientific adventure!
source: TVP World