We are working to develop responses to possible Russian aggression: Polish PM

“Western countries are working together to develop responses to various Russian action scenarios. It is important to speak with one voice during talks with the Kremlin, this is already happening. Latvia and Poland have made a very large contribution,” Prime Minister Mateusz Morawiecki said during the visit of Latvian Prime Minister, Arturs Krišjānis Kariņš, in Warsaw on Wednesday.

The head of the Latvian government said that in the Western world, the reaction to Russia’s policy did not cause divisions. “On the contrary, it rather brought us closer and led to better cooperation than ever before, we already started to strengthen this cooperation amid the Belarusian hybrid attacks,” he said.

Prime Minister Kariņš added that now, in the face of pressure on the Ukrainian border, virtually the entire EU and all NATO countries are cooperating. “You can see that countries want to engage in dialogue with the Kremlin, but it is not about submitting to blackmail, it is about firmly maintaining unity. Many actions are taking place to work out a potential sanctions package,” he emphasised.

The threat to peace

Mr Kariņš pointed out that Russia sees the spread of democracy in Ukraine as a threat. “Hence the military reaction. In the face of this aggression, we must remain united, strong and not ‘succumb to blackmail and pressure from the Kremlin.’”

The head of the Latvian government also talked about hybrid attacks on the border of the EU by the regime of Alyaksandr Lukashenka. “Our forces cooperated and we managed to close the border, we did not succumb to the blackmail of the Belarusian regime. Our tactics turned out to be effective,” he stressed.

“We serve the entire European Union by controlling the border, as well as controlling migration, stopping hybrid attacks,” the Latvian Prime Minister stated. 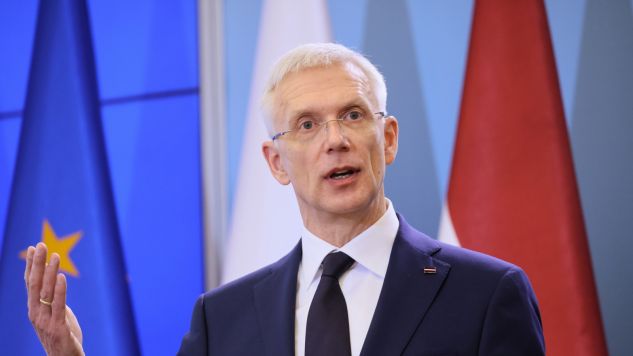 The Polish Prime Minister Mateusz Morawiecki is the most trusted politician according to a January IBRiS survey done for Onet. The poll found that...

He added that triggering the energy crisis was part of a wide range of the Kremlin’s attacks on the west. “How are we reacting? In the short term, Poland, Latvia and other countries are trying to support households, businesses and industries in the face of these surges in energy prices.”

Prime Minister Kariņš concluded his speech by saying that his government supports the EU’s green transformation. However, citizens cannot cover the rise in energy prices. “Therefore, this transformation should go in a direction possible for Latvia and Poland.”

The head of the Polish government said that three topics must be distinguished. Firstly making everyone aware of the threat posed by Russia, secondly to remain united, and thirdly to “prepare for the worst, if this scenario were to materialise”.

The situation on the border between Russia and Ukraine is still serious as Russia has deployed over 100,000 soldiers in this region.

Moreover, joint Russian-Belarusian military manoeuvres are scheduled for February 10-20, among others in Belarus. Russian equipment, including two S-400 missile squadrons, 12 Su-35 fighters and the Pancyr-S artillery and missile squadron, are to be placed in Belarus.
source: