30 years ago, on October 27, 1991, the first fully free parliamentary elections in over six decades were held in Poland. The Sejm (Polish parliament’s lower house), elected with a very low turnout, was extremely divided politically and unable to establish a permanent government majority. It only survived for two years.

The year 1991 is considered by historians to be the most difficult year in the period of transformation in Poland. The disintegration of the “Solidarity” camp, which had been progressing since the spring of 1990, was crowned with the presidential elections. Immediately after them, their biggest loser - the then Prime Minister Tadeusz Mazowiecki - resigned. Jan Krzysztof Bielecki, a representative of the Liberal Democratic Congress (KLD), became the new head of government. During his rule, there was a sudden and very painful transformation from central planning to a free market economy.

The Sejm, elected in the 1989 elections, completely failed to reflect the new divisions of the emerging political scene. The forces originating from the People’s Republic of Poland (PRL), which constituted the majority of the 1989 Sejm, did not have a democratic mandate and were under strong pressure from solidarity groups, therefore they easily agreed to the changes proposed by the government and the president. In turn, representatives of formations emerging from the circles of the former democratic opposition insisted on holding free elections, citing the lack of representativeness of the parliament.

Eventually, the Sejm adopted a resolution to organise elections in the autumn of 1991. After long debates, the deputies worked out the principle of proportional distribution of seats. 391 deputies were to be elected in 37 constituencies, in which it was possible to win from 7 to 17 deputy seats. 69 seats in the Sejm were to be assigned to people who won seats in at least 5 constituencies or received 5 percent of the votes nationwide.

The rules of elections to the Senate, in force since 1989, were left unchanged. Two senators were elected from each of 49 districts and three from Warsaw and Upper Silesia.

By the beginning of September it had already emerged that the fears of some observers, who warned against the fragmentation of the Sejm, were justified. The State Electoral Commission registered as many as 29 nationwide election committees.

The elections took place on October 27, 1991. The specific electoral law, combined with the emerging party system, resulted in an extremely fragmented composition of the Sejm. Representatives of as many as 24 groups participated in the elections, of which 10 brought more than 10 deputies to the chamber.

The chaos of the political campaign and the disappointment with the painful transformation resulted in a very low turnout of just over 43 percent. The elections were heavily criticised by the foreign press, calling them “a farewell gift of communism to Polish democracy.” 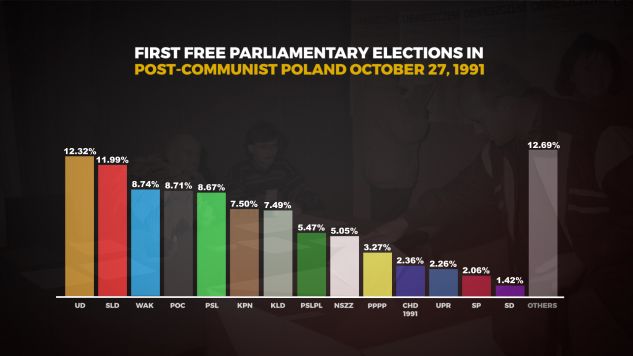 Results of the elections. Photo: Poland IN

45 years ago, on September 23, 1976, the establishment of the Workers’ Defence Committee (KOR) was announced. Its members openly stood out against...

Initially, President Lech Wałęsa entrusted the mission of forming a new government with Bronisław Geremek, representing the Democratic Union with the most mandates. However, he was unable to form a majority sufficient to obtain a vote of confidence.

Ultimately, therefore, the cabinet was formed by Jan Olszewski on the basis of a coalition of the Center Civic Alliance, Christian National Union and Peasants' Agreement, without a parliamentary majority.

The first democratic government of the Third Republic of Poland was overthrown on June 4, 1992. On that day, a hastily created coalition, opposing lustration, entrusted Waldemar Pawlak from the Polish People’s Party with the mission of establishing the government. After a month, the new Prime Minister resigned as he was unable to form a parliamentary majority.

The new government was created by Hanna Suchocka from the Democratic Union. Her office lasted less than two years - until May 29, 1993.

Subsequent elections, as part of the ordinance promoting large groups, brought victory for the post-communist parties and a gigantic defeat for the fragmented right wing.