If elections were held this Sunday, Law and Justice would get 36.4 percent of the vote, which is 2.2 percentage points more than in the August Survey.

The Civic Coalition (KO), the main opposition group, would come second with 22.5 percent, which is a fall of 5.3 percentage points from the last survey. Former television star Szymon Holownia's Poland 2050 party took a plunge of 0.8 percentage points and fell to 9.2 percent. 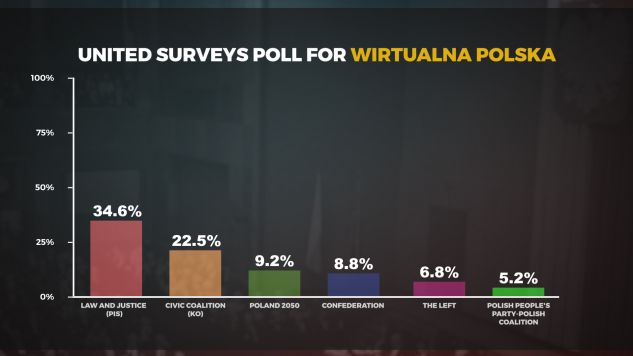 Three other parties would also cross the 5-percent parliamentary threshold. The right-wing Confederation with 8.8 percent, a 2.9 percentage point increase in relation to the previous poll, the Left with 6.8 percent and the Polish People's Party-Polish Coalition (PSL), backed by 5.2 percent of respondents.

11.3 percent of respondents don’t know who to vote for.

The declared turnout stood at 41.3 percent.

United Survey conducted the poll on September 10 using the Computer-Assisted Telephone Interview (CATI) method on a group of 1,000 adult Poles.