Natalia Partyka and Karolina Pęk won the gold in a double table tennis game, Barbara Bieganowska-Zając finished first in the 1,500 metres (T20), while Karolina Kucharczyk added yet another gold to Poland’s tally, winning the women’s long jump (T20). In turn, Maciej Lepiato took bronze in the high jump (T44) at the Tokyo Paralympic Games on Friday.

Szymon Sowiński won silver in pistol shooting from 25 meters (cat. SH1) during the Paralympic Games in Tokyo. This is the 19th medal for Poland in...

Natalia Partyka and Karolina Pęk defeated Yang Qian and Lei Li from Australia. The rivals previously won gold medals in singles. For Natalia Partyka it is the sixth gold medal in her career at the Paralympic Games.

Bieganowska-Zając reached the finish line in 4:27.84 and achieved a decisive victory. The second Ukrainian, Ludmila Danylina, lost to the Pole by almost five seconds. Hannah Taunton from Great Britain was third.

The 40-year-old athlete is an extremely experienced and titled athlete. She won her first title in 800 metres at the Paralympic Games in Sydney in 2000. Later, she proved herself as a top runner in the 1,500 metres in London (2012) and Rio de Janeiro (2016).

On Friday afternoon, Karolina Kucharczyk outclassed her rivals in the long jump event, landing 6.03 metres in her best attempt. Nevertheless, even her shortest result, 5,79, would have allowed her to reach out for gold comfortably.

Meanwhile, Maciej Lepiato, who won gold in London (2012) and Rio de Janeiro (2016) in the high jump, this time finished third with a result of 2.04 meters. Jonathan Broom-Edwards from Great Britain was first, (2.10) while the Indian Praveen Kumar (2.07) took silver.

All in all, Poland has gathered 23 medals: six golds, six silvers and 11 bronzes in the Tokyo Paralympics, which will last until September 5. 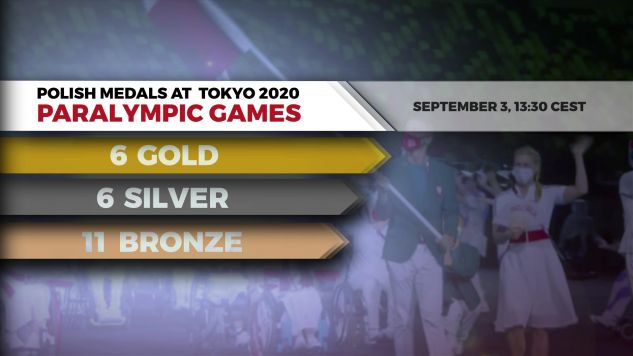