COVID-19: nearly 50 pct of Poles want vaccination but some sceptical

Close to half of all Poles plan to get vaccinated against coronavirus, according to a new poll by IBRiS pollster commissioned and published by the “Rzeczpospolita” daily on Monday.

The daily found that 47 percent of Poles are either "determined" to get vaccinated or "rather" planning to do so.

However, 44 percent plan to shun the vaccination, and 9 percent have not made up their mind yet.

The poll comes as the Polish authorities started a nationwide vaccination programme, and a media campaign encouraging people to get the voluntary vaccination.

Interestingly, men differed from women in their approach towards vaccination, with 59 percent of the former expressing their eagerness to vaccinate against 35 percent of the latter.

According to the newspaper, there is a clear correlation between the age of the respondents and their willingness to get vaccinated. Only 29 and 28 percent of the respondents from the 18-29 and 30-39 age brackets, respectively, stated that they want to get the vaccine.

But 67 percent of respondents in the above-70 age bracket, are ready to get vaccinated.

Still, even more intriguing is the fact that the preferred media outlet influences individual inclinations for being vaccinated. With this said, 64 percent of people finding their source of information in TV news programmes, dailies and weeklies would submit themselves to jabbing. As many as 65 percent of viewers of the private broadcaster TVN 24 and 63 percent of Polsat News would get vaccinated. Meanwhile, 56 percent of TVP Info, a news channel of Poland’s public broadcaster TVP, would like to be vaccinated.

The least convinced about the vaccination are those citizens whose worldviews were predominantly formed by social media, number 46 percent. 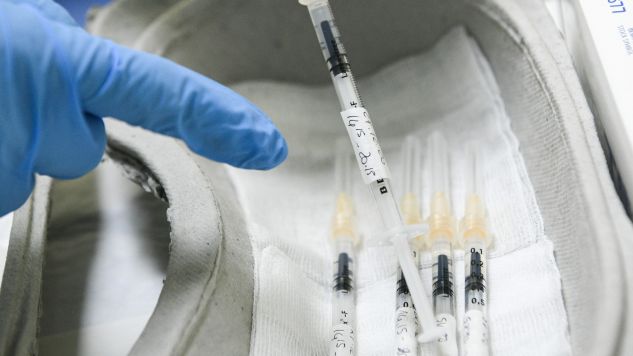 Just 2 percent of the respondents cited their belief in a conspiracy of global corporations as a reason for their abstaining from the vaccine. Photo: EPA/PIERO CRUCIATTI

To vax or not to vax?

Half of those who declared keenness for the injection said they would do it because the “vaccination is an opportunity for a return to normal living”, 20 percent feared that they could infect their closest ones, 16 percent felt vaccination was their civil duty, and 14 percent would get vaccinated out of fear of falling ill with COVID-19 themselves.

Sceptics feeling that “the vaccine is not tested and is dangerous because it was designed too quickly” amount to 42 percent. Others, namely 17 percent, said that given the fact they did not get vaccinated against ordinary flu they would also refrain from doing so against coronavirus. A total of 15 percent deemed the vaccine unnecessary “because a healthy lifestyle suffices”. In the meantime, 14 percent declared that no epidemiological evidence could be demonstrated that the vaccines actually work.

Just 2 percent of the respondents cited their belief in a conspiracy of global corporations as a reason for their abstaining from the vaccine and 4 percent confessed they have already pulled through the infection.

Commenting on the poll results, Marcin Duma, head of IBRIS, said that the anti-vax index “displays similarities to the ones in France and Russia. We need to be clear about this – we’re not dealing with the top of the societies eager [to get vaccinated]. For instance, the Italians… declare their willingness to get vaccinated much more eagerly.”

A total of 33 percent of the respondents were unable to point to anything that could convince them.

Under the vaccination programme medical staff will be the first to get the jabs, followed by senior citizens, the uniformed services and teachers. It will be possible for all Poles to start signing up for vaccination against the coronavirus on January 15, 2021.