On Thursday early afternoon, a storm went through the Tatra mountains leaving four people dead and over 100 wounded. Tourists who were on the peak of Giewont mountain were exposed to a series of lightning strikes.

After receiving information about the incident, the Tatra Volunteer Search and Rescue (TOPR) and the state Air Rescue Service immediately sent their helicopters to the site of the accident. The rescue mission is ongoing.

Earlier, the spokesperson of the Air Rescue Service (LPR) stated that at least 22 people are wounded, but none had died. Meanwhile, the TOPR rescue service’s head stated that “at least a dozen people were hit by lightning in the vicinity of Giewont mountain. There are also several deaths in several places in the Tatras.” According to the spokesperson of the Rescue Service in Kraków, two people died in the Tatra mountains during Thursday’s storm.

During a press conference held on Thursday afternoon, rescue services announced there are four people dead and at least 89 wounded. Among the dead are two children. One tourist died on the Slovak side of the Tatra mountains.

Hiking conditions were ideal on Thursday morning in Zakopane. Around noon, the weather suddenly changed and a heavy storm went through the area.

All tourist trails near Giewont have been closed.

This is one of the most tragic accidents caused by lightning strikes in years. The last such event on mount Giewont occured in 1937, when four people died, and 13 were injured by lightning.

The government has announced that Prime Minister Mateusz Morawiecki is on his way to the Tatras to inspect the situation.

President Andrzej Duda has tweeted his sympathies for the casualties.

The US Ambassador to Poland, Georgette Mosbacher, has also expressed her sympathies to the victims of the accident in a tweet posted on Thursday. 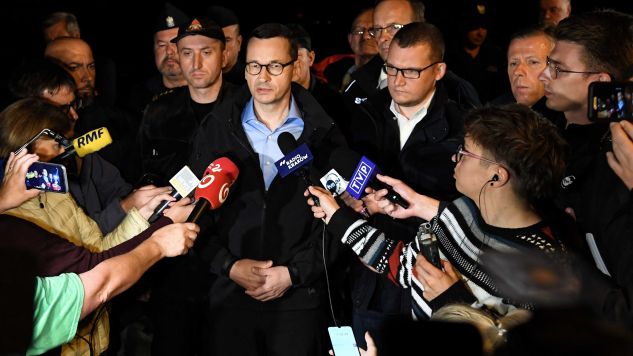 Photo: PAP/PM Morawiecki at a press conference in Zakopane on Thursday evening

On Thursday evening, Poland’s PM Mateusz Morawiecki held a press conference at the Zakopane mountain resort, where the tragedy occurred.

During the conference, PM Morawiecki expressed his condolences to the families of the victims of the storm and thanked all the rescue services for their help to all the injured.

“As far as we know four people did not survive these rapid, unusual, very rare lightning discharges,” PM Morawiecki said, adding that the services “carried out the mission of rescuing all those who had been injured very professionally.”

The rescue mission has been suspended, and will be resumed on Friday morning. Because of the character of the storm, “there might still be people stuck in the mountains,” the Prime Minister said, assuring that rescue services will be looking for people as soon as the sun rises on Friday morning.