On March 12, 1999, Poland, the Czech Republic and Hungary joined NATO as the first three countries of the former Warsaw Pact and communist bloc.

Jens Stoltenberg, the Secretary General of NATO, told the Polish Press Agency (PAP) that involvement of Poland in operations conducted by this...

In 1989, the year of 40th anniversary of establishing NATO, the process of transformation from the communist system in Central-Eastern Europe made Western politicians think about the relations between the Alliance and the countries of the Warsaw Pact.

A year later, Poland established diplomatic relations with NATO, when the then FM Krzysztof Skubiszewski visited the Headquarters of the Alliance in Brussels, Belgium. He said that the Warsaw Pact would be dissolved, and there would be a new system of European security.

Similar opinions were heard from Prague. Václav Havel, the president of Czechoslovakia, said that the bases of the security should be the arrangements of the Conference on Security and Co-operation in Europe and the political institutions of NATO. Hungarian politicians were bolder, the then Hungarian FM Gyula Horn said that Budapest will join NATO in several years.

The contacts between NATO and Warsaw intensified and the US president George H. W. Bush invited Poland and other countries to participate in the Alliance assemblies without the right of vote. The North Atlantic Cooperation Council was established, comprising not only Central-European countries but also some post-Soviet states.

Visegrad Group states proved their worth to NATO: PM

The breakthrough in Poland’s NATO aspirations was establishing the government of Jan Olszewski, after the first free elections in Poland after the fall of communism.

This issue was brought up in his expose given on December 21, 1991. “Poland will tighten its relations with the North-Atlantic Treaty Organisation. We believe it is a pillar of European security and the military presence of the US is a factor of that stability. This is why the government will continue developing ties with NATO... It will be a policy improving our security,” the then PM said. The Defence Minister Jan Parys said that “in a broader perspective” Poland wants to be a member of NATO.

In 1992, the Defence Committee of Poland accepted the defence doctrine with the membership of NATO as the main purpose. A majority of Polish political parties supported accession to the alliance, except the post-communist Social-democracy of Poland.

In March 1993, Polish, Czech and US presidents Lech Wałęsa, Václav Havel, and Bill Clinton met at Holocaust Museum in Washington DC. According to reports, Mr Wałęsa told his American counterpart that Poland should be accepted in NATO, “because of the Allies’ treason at the Yalta conference.”

Five months later, the Russian President Boris Yeltsin came to Poland. During the dinner, the Russian head of the state declared that Moscow will not object to Poland joining NATO. A few weeks later the Russian president retracted this declaration.

The Polish President Andrzej Duda met in Warsaw with Jens Stoltenberg, the Secretary General of NATO.

In 1994, NATO established the Partnership for Peace programme. Its main purpose was starting closer cooperation with post-communist countries. The way to do it was organising common exercises and peace missions. Poland was the first country that joined the programme.

US president Bill Clinton recommended accepting new members by 1999, on the 50th anniversary of establishing NATO.

The alliance had been stressing that the extension of NATO is not against any country, but Russia still objected. This attitude changed, when in 1997, during the Summit in Paris, the Founding Act on Mutual Relations, Cooperation and Security between NATO and the Russian Federation was signed. One of its elements was a Permanent Common NATO-Russia council.

The NATO summit in Madrid invited Poland, Czech Republic and Hungary in July 1997. In August, the Polish parliament gave a green light to accession negotiations. They were concluded in October, the accession protocol was signed on December 16. The NATO members started ratifying the treaty extending the alliance in 1998.

On February 11, 1999, the Polish parliament gave its permission for the Washington Treaty to be ratified by the Polish president.

A month later, on March 12, in the town of Independence, Missouri, Poland, Czech Republic and Hungary were officially accepted as members of NATO. The Foreign Ministers of Poland (Bronisław Geremek), Czech Republic (Jan Kavan) and Hungary (János Martonyi) handed the ratification instruments to Madeleine Albright, the then Secretary of State of the US.

Poland, Czech Republic and Hungary were the first former Warsaw Pact members to join NATO. In 2004, Bulgaria, Estonia, Latvia, Lithuania, Romania, Slovakia and Slovenia followed in their footsteps. Another extension took place in 2009 when Albania and Croatia joined NATO. In 2017 Montenegro became a member. In February 2019, Northern Macedonia signed the accession protocol and soon it will be the 30th member of NATO. 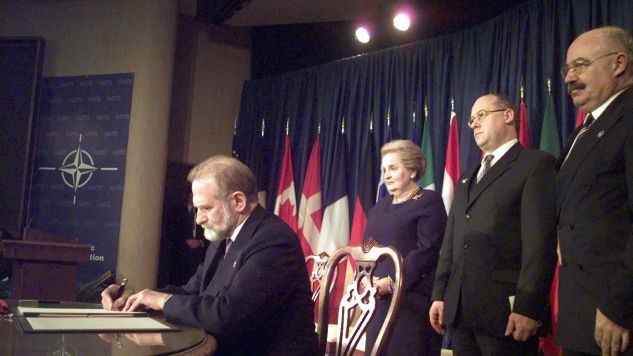