On March 1 Poland is commemorating “Indomitable Soldiers,” who were fighting against Soviets and communists after WWII.

The “Indomitable Soldiers”, also known as “Doomed Soldiers” and “Unbroken Soldiers” were people who did not stop their fight after the end of WWII. After Nazi Germany had been defeated and withdrew from the area of Poland, the Soviet Red Army and NKVD, as well as Polish communists who took over power and introduced a totalitarian regime in Poland, became the new enemies for those who did not want to accept communist tyranny. During the communist reign, it was forbidden to commemorate Indomitable Soldiers and knowledge about them was erased from public sources.

Many of those murdered by the communists were buried in unmarked graves and the location of their remains is still unknown.

Communists struggled to subdue these soldiers who in many cases were very well organised. They were often called “bandits” by the ruling regime and treated as “national traitors” and “agents of the foreign powers.” Many of them were heroes of the WWII, such as Captain Witold Pilecki and General August Emil “Nil” Fieldorf.

One of the symbols of the tragedy of these people was a young nurse Danuta “Inka” Siedzikówna of the Home Army 5th Vilnius Brigade. She was accused by communists of being a member of an illegal organisation, possession of weapons and inciting murder. In prison, she was tortured but refused to reveal any information about her associates.

“Inka” was sentenced to death and shot in August 1946. At the final moment, she called out “Long Live Poland!” Before her execution, in a letter smuggled to her friends, she wrote: “Tell my grandmother that I did the right thing.”

However, there were some controversial characters among the Indomitable Soldiers who are accused of crimes even by modern historians. The most often discussed examples are the stories of Romuald “Bury” Rajs, who was, according to reports, responsible for murdering Orthodox civilians in eastern Poland, and Józef “Ogień” Kuraś accused of murdering Jews and Slovaks in southern areas of Poland. 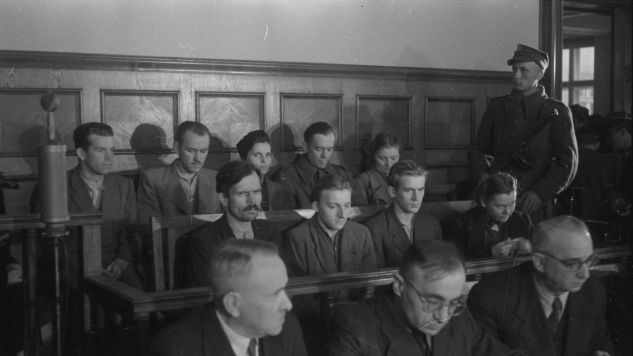 A trial of members of the Polish anti-communist underground in 1945. Photo: PAP arch./CAF

The northern Polish city of Gdynia becomes a venue for a film festival dedicated to anti-communist guerrillas.

On March 1, 1951, in the prison in Warsaw, the communist authorities shot seven members of the leadership of the “Freedom and Independence Union”, one of the major organisations of the anti-communist underground. They were sentenced to death after a show trial.

The anniversary of their execution has been commemorated as the National Indomitable Soldiers Remembrance Day since 2011.

Many events all around Poland are scheduled to take place on Friday. Mariusz Błaszczak, the Polish Defence Minister, has already laid a wreath at the Pantheon-Mausoleum of Indomitable Soldiers at the Warsaw Powązki Cemetery. At noon, the Polish president Andrzej Duda will award distinctions on the occasion of the National Remembrance Day.

The ceremony of the remembrance of the fallen is scheduled to take place at 6pm at the Józef Piłsudski’s square in Warsaw. It will be attended by the President, the Prime Minister Mateusz Morawiecki and the Defence Minister.