Lublin’s first pride parade took place on Saturday despite the aggressive actions of the counter protestors.

The march was in doubt when the city’s mayor banned the event citing security concerns. On Friday, the Court of Appeal overruled the ban, citing freedom of assembly.

On Saturday, some 1,500 people (according to police's estimates) attended the parade and marched through Lublin’s streets. They were accompanied by counter demonstration of about 200 individuals. Stones and bottles were thrown, flares lit. Several protesters tried to block the march but were removed by the police.

After less than an hour, the counter demonstration was banned by the police but the protesters remained until the march’s conclusion.

The police were forced to use tear gas and water cannons, officers had to draw the protesters away from the march’s participants. 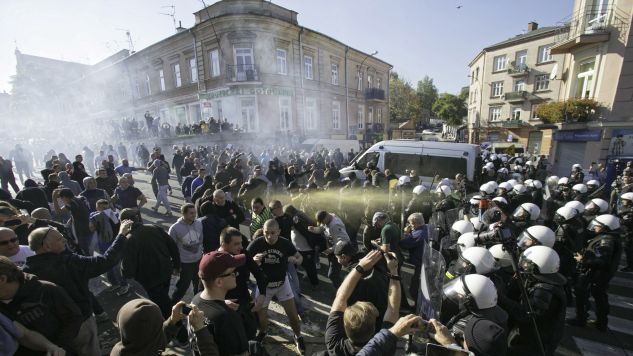 “We have arrested several people but I am sure that number will increase”, the Lublin police spokeswoman Renata Laszczka-Rusek informed. “During the gathering we provided security for the participants despite the numerous illegal actions of their opponents.”

The police were praised by the march’s participants for preventive actions and providing sufficient security.

Mariusz Ciarka, the spokesman for [Poland’s] Chief of Police, stressed that despite the march having been concluded, police officers will not be relieved for several hours.

“It is going to be a long day for us. We need to provide security until late this evening,” he said.

Police reported of two injured officers who were assaulted by the hooligans.

“Police reacted adequately to the situation whereas the actions of the counter demonstrators speak for themselves,” added Mr Ciarka.