Prof. George Friedman, a prominent American geopolitics expert, considers Poland to be a rising power. In an interview with the weekly “Gazeta Polska” published on Wednesday, he argues that Poland’s position between Russia and Germany, its economic competitiveness and its strategic relations with the US makes Poland an increasingly significant country.

The author of the highly publicised book “The next 100 years” believes that the interests of Poland and the USA are currently in line. “America’s main interest in Europe is to block Russia. This can be done via Poland and, to some extent, Romania. “

Prof. Friedman goes on to argue that the US feels that it cannot any longer count on western Europe, especially Germany. He thinks that the US cannot any longer be certain that should there be a military confrontation with Russia “Germany would allow for quick passage of US troops through its territory.”

The American expert is of the opinion that Poland is also vital to US interests because America has to do everything in its power to prevent an alliance between Russia and Germany as “combining Russian energy resources and raw materials with German technology would be a threat to US hegemony.” He asserts that this lies at the heart of US decisions to engage at the end of WWI and also in WWII.

Reminded of his prediction made ten years ago that Poland is in a group of four nations destined to become superpowers, George Friedman confirms that prognosis.

“Let us examine where Poland was ten years ago, and where it is today. Poland is not yet the major player in Europe, but its significance is much greater than it was. My forecast was based on the fact that Poland lies between Russia and Germany. Today we can see that Germany is having real problems retaining its leadership role in Europe and Poland is one of the most economically promising parts of the world. You have a highly educated and able population which works still at competitive rates.” 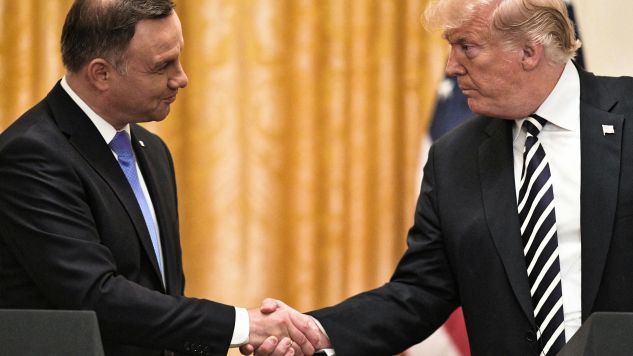 Strategic alliance with the US is key

Prof. Friedman points to three factors which make Poland important. The first two are the geopolitical location between two “declining” regional powers. The third factor is the “strategic alliance with the US”. This is a key factor, argues George Friedman.

“Just look at South Korea or Israel. Both these states are key US allies and both have, since the 1950s, undergone a rapid transformation from being poor countries to being major industrial and ideological powers. A strategic relationship with America always comes with investment and transfer of technology.”

The US geopolitics guru is not convinced as yet that the “Three Seas Initiative” will be important in Poland’s rise. He believes that to be significant it needs “to establish a solid institutional base”. He also feels it should avoid making the same mistakes that the UE has made of “spreading its resources and ambitions too widely”

The future of the EU

Prof. Friedman is pessimistic for the prospects of the EU. He argues that the north-south divide is too great. “It is based only on treaties regarding interests of different states, and when that interest is no longer felt then they can leave, like Britain.” He adds that this problem was resolved in the US through a conflict that cost 600,000 lives, referring to the civil war. He doubts the EU is an institution that could lead people to want to lay down their lives for it.

“Whenever I am in Europe I always ask the same question of my audience: ‘which of you would be willing to give up their lives for the EU?’ I always get collective laughter in response. An institution for which no one is prepared to give up their life cannot survive.”

Asked about the pressure being applied on Poland and Hungary by the EU, prof. Friedman feels that this is a “desperate attempt at maintaining unity via attempting standardisation”. He finds the dispute over the rule of law absurd.

George Friedman’s words will be music to the present government’s ears. Both President Duda and the Morawiecki government have made establishing a close relationship with the US a key priority.

If prof. Friedman is right in his geopolitical vision then “Fort Trump” is more than likely. If Poland really is the only way of stopping a Russian-German alliance then the US is likely to see military bases in the country as a sound investment in its own interests.

However, if he is wrong about President Trump’s intentions towards Russia, things maybe more complicated. If the current US President feels that getting an alliance with Russia would help him combat the economic rise of China and Iranian expansionism in the Middle East, he might be tempted to let Russia regain its influence in Central Europe. This is a very remote prospect.

Poland will maintain its drive for a strategic partnership with the US, but despite concerns about the EU, it will not want to disengage at that level. It has staked too much on its membership in the EU to do that.

Poland does not have superpower ambitions, though it certainly has ambitions to be a leader in its region. Its convening of the “Three Seas” initiative is testimony to that, but unlike the current US administration it is more committed to multilateralism through the EU, NATO and the UN.

Poland, like any other country, does not want to be totally dependent on the US for its defences or energy needs. If the EU did indeed implode, then it would have no alternative. This is why Poland will want the EU to survive.


Return to the top of the page.