During the annual Economic Forum in Krynica, southern Poland, a Polish company called KHM Motor Poland unveiled a prototype of a new sports car carrying the legendary Warszawa brand, harking back to the earliest days of Poland’s post-war motoring revival.

Called the Warszawa M20 GT, the car is intended as a homage to the original Warszawa (Warsaw), the first mass-produced car in Poland after its industry was decimated during World War II. Yet with its rakish looks and promises of adrenaline-inducing performance, the new prototype is a far cry from the rather stolid four-door saloon car which allegedly inspired it. With its distinctive fastback profile, the car attempts to invoke the typical 1940’s styling that characterised the original Warszawa, but its aggressive, avant-garde front would not be out of place in a Ferrari or a modern-day TVR, not to mention that no two-door sports version of the Warszawa has ever existed.

Unlike its illustrious predecessor, the new car will be a low-volume affair, with the company expecting to shift some ten bespoke cars per year. The original Warszawa, manufactured in various iterations between 1950 and 1964 – was a mass-produced vehicle, with more than 250,000 cars on Poland’s roads by the time production came to a close. The only common feature, it seems, will be limited availability, for the original Warszawa was very much beyond the reach of the average working-class citizen, with most of the early cars being driven by mid-level communist party officials before the arrival of more modern cars consigned Warszawas to taxicab work.

Looking at the new prototype’s specs, one may also conclude that the two cars have one more thing in common, namely the reliance on foreign technology. The original Warszawa was in fact a rebadged Soviet GAZ M-20 Pobeda (“Victory”), while the new car, although designed in Poland, is expected to use a Ford powertrain, including a 5.0-litre V8 engine churning out a healthy 420 HP and originally found in the Ford Mustang. 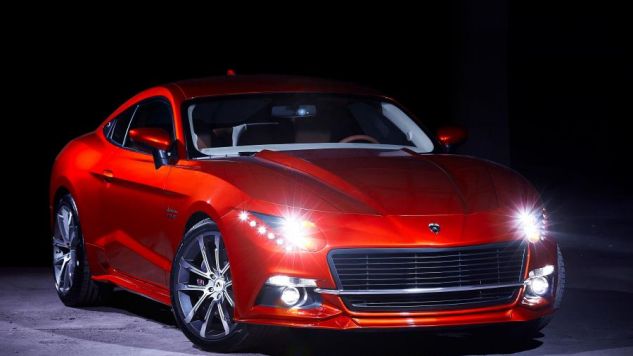 Using Ford Mustang engine and transmission, the car will be more than 8 times as powerful as the original Warszawa. Photo: KHM Motor Poland

With its dashing red paintjob and concept-car looks, the new Warszawa drew admiring glances at the Krynica Economic Forum, but is by no means the first attempt to bring Poland’s car industry back from the dead, at least in a symbolic way. Unlike the public transport sector, which continued to thrive following the collapse of communism in 1989, with companies such as Solaris Bus & Coach attaining a considerable international success, Poland’s car industry was not quite as lucky. Warsaw’s FSO, the oldest car factory in the country, was closed back in 2010, having produced about four million cars in total, including both domestic models and foreign cars under both the Daewoo and Chevrolet brands.

Since that time, Poland was left without a high-volume domestic car manufacturer, a situation which many have decried as an outrage given the wasted potential that the industry once had. Many have pointed out that there has never been a writing on the wall for the country’s car industry, given just how well the Czech company Skoda did following its acquisition by the Volkswagen Group. The only cars manufactured in Poland in more than a decade have been foreign vehicles, including models from Opel, Fiat and Ford. In 2017, a total of 689 729 cars rolled down Poland’s assembly lines, yet the period during which vehicles created by Polish car designers graced the country’s roads was now over.

For the last couple of years, entrepreneurs and enthusiasts have proposed various modern incarnations of Poland’s postwar motoring legends, including several attempts at reviving the Syrena – a small economy car which had originally been known for its unreliable mechanics, but has since attained a nostalgic charm in the eyes of many. Some other companies, on the other hand, decided to embrace the future instead, attempting to craft high-performance cars for the chosen few. The best-known example of this trend is the Arrinera Hussarya – a Polish-designed supercar reminiscent of a McLaren or Lamborghini which has already dipped its toe in racing and has recently received type approval for public roads. Nevertheless, all these initiatives remain low-volume affairs, with no plans for a Polish mass-produced Polish car likely to materialize anytime soon.