On Tuesday, the Federal Court of Justice of Germany (BGH) officially published its July ruling in which it held that the judgment of a Polish court ordering the German TV broadcaster ZDF to publicly apologize for using the inaccurate “Polish Death Camps” phrase does not apply in Germany as it would curb freedom of speech.

A 95-year old New Yorker believed to be a former guard at a labor camp in Nazi-occupied Poland arrived in Germany after being arrested and deported...

In its judgment, the BGH overruled the decisions of the lower German courts and dismissed the claim filed by the 96-year-old Karol Tendera, the former prisoner of the Auschwitz Nazi German concentration and extermination camp located in Oświęcim, southern Poland. The top German court also held that the applicant will now have to cover the costs of the proceedings, which amounted to EUR 4,000 in total.

While confirming that the phrase “Polish Death Camps” used by ZDF in its report was indeed inaccurate, the BGH concluded that the decision of the Polish court, which ordered the German broadcaster to publish a specific apology on its website, was a disproportionate penalty given that ZDF has already issued a general apology and edited its article to remove the previous inaccuracies. The BGH also stated in its judgment that enforcing the Polish ruling would be “an obvious violation of the fundamental rule of freedom of opinion and the media”.

In his claim filed with a Polish court, Mr Tendera demanded that the broadcaster issue a specific apology for its 2013 article and asked the court to impose a general prohibition on the use of misleading statements suggesting Poland’s complicity in the Holocaust. The former prisoner alleged that the publication was an affront to his national identity and dignity as a Polish citizen.

In its subsequent ruling, the Polish Court of Appeal held that ZDF must apologize to the offended prisoner of war by publishing a specific statement on its home page. The German broadcaster, however, did not fully comply with the judgment, choosing to release the apology under one of the tabs of the website, which meant that they were not as visible to its users as they ought to have been.

The judgment of the Polish court was subsequently held to be enforceable by two German courts, with the 2017 ruling ordering the broadcaster to issue an apology being a first for the German justice system. 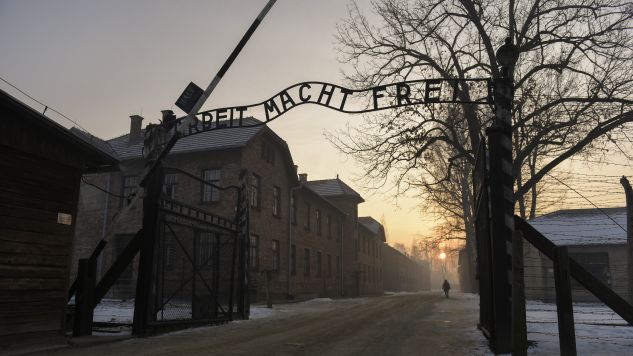 The entrance gate into the Auschwitz concentration camp, one of the sites of systematic extermination of Jews by the Nazi German authorities during WWII. Photo: Omar Marques/Anadolu Agency/Getty Images

During WWII, the German Third Reich embarked upon a systematic and merciless plan of ethnic cleansing which called for the complete annihilation of the Jewish people in Europe. Since Poland had a massive Jewish population at the time, amounting to some three million in total, the Nazi German state decided to build extermination camps on the Polish soil instead of transporting prisoners to the German territory.

The misleading phrase “Polish death camps” regrettably continues to appears in the media on various occasions, the most recent case being the use of the term in a Fox News report, for which the American broadcaster later apologized.

Earlier this year, Poland passed controversial legislation which included criminal penalties for the use of the “Polish death camps” phrase or any suggestions that the Polish state or people in general were complicit in the Holocaust, notwithstanding isolated examples whereby Poles committed criminal acts against their Jewish neighbors during the war.

The new law, however, was accused of being inimical to the freedom of speech and sparked an outrage among some members of the Jewish community worldwide, ultimately leading the government to drop the criminal penalties from the divisive legislation.
source: