After three months and more than 15,000km, Arkady Paweł Fiedler has become the first person to drive across the African continent in an electric car.

Mr Fiedler, from west-central Poland, described the expedition as a “journey into the unknown,” which covered a total of 15,176km (9,430 miles) through 14 African countries.

Speaking with Polish news website Onet, the explorer claimed that his biggest fear was where to charge the car’s electric motor.

“Right now, Africa is the most difficult continent for an electric car. Sometimes I was driving not knowing if I would have anywhere to charge it,” he said. Mr Fiedler added that he had a “strategy” which didn’t let him down. In total he charged the car, a Nissan LEAF, exactly 100 times.

“Above all I was thinking about driving sparingly. About reaching the next outlet. But there were times when I arrived and it turned out that either the electricity supply was too weak, or there was none at all,” he said. There was that constant uncertainty throughout the whole journey.”

According to the explorer, the two things which helped him most on his expedition were patience – which, he says, he had to learn – and the kindness of people, who gave him access to their electricity supply despite language barriers and fears that he might use it all up.

“People were worried that I would use so much electricity that they would go bankrupt. Of course I paid for the electricity – always a little more than for what I used – and even those who didn’t exactly understand me let me use their power. If it wasn’t for them I would not have reached my goal,” Mr Fiedler explained. 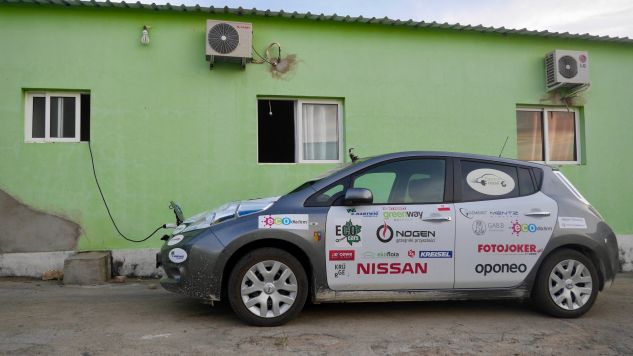 “People were worried that I would use so much electricity that they would go bankrupt," Mr Fiedler said. Photo: Facebook/Arkady Fiedler - PoDrodze

The “journey into the unknown” began on February 14 in Cape Town, one of the southernmost cities on the continent, and ended at the Tanger-Med Port at the northernmost tip of Morocco. However, the idea had been planted in the explorer’s mind long before.

“In 2010 I followed the story of some British students who were the first to drive across an entire continent – South America – in an electric car. I thought about driving across Asia or Europe, but in the end I thought it would be worth trying something nobody had done before and drive across Africa,” he said.

It started with a ‘Maluch’

Mr Fiedler is no stranger to difficult drives. Before completing this expedition, he had crossed Poland, Africa (from Egypt to South Africa) and Asia in a Fiat 126P. The Polish-made car, affectionately known in Poland as a “Maluch” is an icon of the country’s automotive history.

A self-proclaimed car fanatic, Mr Fiedler claimed that he tries to be ecologically aware, and that he very much enjoyed driving the electric car, however he is not yet finished with the “Maluch”.

On a roll: eco car goes to Japan

A Polish explorer has set off in an electric car on a trans-Siberian expedition to Japan.

“I would like to finish my film project … with the Maluch. I still have the two Americas to drive across. And then what? I have plenty of ideas for further expeditions,” he said. Mr Fielder is working on a film called “PoDrodze” (“On the Way”) which documents his trips around the globe.

Mr Fiedler is not the only Pole to accept the challenge of a transcontinental road trip in an electric car. Last month Marek Kamiński set out on his No Trace Expedition from Poland to Japan.

Mr Fiedler is the grandson of Arkady Fiedler (Sr) a famous Polish writer, journalist and adventurer, whose works were particularly popular at the time of the communist rule in Poland, as not many people got a chance to travel back then.